From the RuneScape Wiki, the wiki for all things RuneScape
Jump to: navigation, search
Snowboard (tier 5)? (edit)

The snowboard (tier 5) is an item used in the 2014 Christmas event. It can be equipped and used to slide down the large snowramp at the Lumbridge Crater. After having earned 8,000 reputation (for a total of 15,500 reputation), members can turn it into a snowboard (frosty), snowboard (shark) or snowboard (skull). 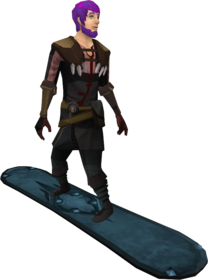