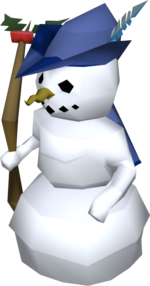 Once completed, these Snowmen would become level 29 (regardless of the maker's combat level) with a maximum hit of 4 damage (equivalent to 40 life points), and would try to attack other snowmen. It could not be attacked by players. However, players could throw a snowball at one to regenerate its health by one point (equivalent to 10 life points). All snow men give 13xp when killed.

The combat snowmen returned in 2011, there was a snowman battle between Wizard Whitezag and Wizard Frumscone, players could help one of them by building snowmen on one of the snowman patches that were on each side of the battlefield by adding snow to them. Snow could be collected from the pile of snow (or with a Snow globe if they had one), they could choose what snowman they wanted to make, a warrior, a ranger or a mage, when the player added enough snow their team's wizard would bring it to life. A holly bow is not needed. The goal of this minigame was to let your team's snowmen reach the other side of the field. But the other team could also build snowmen and when the snowman faced each other they would fight, you could help your snowmen by pelting them with Snowballs to heal them. When one of the snowmen died the others could walk further, when a snowman reached the other side your team would gain a point. They have 300 life points.

Like the Snow warrior and Snow mage, it abides by the rules of the combat triangle, and will most likely melt a mage, but not a warrior.

During random times in the day, it will be announced (in your Runescape chat box in yellow writing) that Snow rangers (also mages and warriors) have been dispatched to any given location (such as the Lumbridge cow fields). Killing them results in minimal experience and some drops (such as 3 noted chocolate bars). However since the release of Evolution of Combat it can be difficult to receive credit for a kill as a player must be the first to attack and damage the Snow Ranger. This can be made difficult due to the popularity of the holiday event; particularly when players bring a Dwarf multicannon. 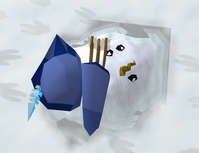 During "Episode 3: License to Chill" of the 2015 Christmas event, the player and the Queen of Snow build a snow ranger, a snow mage, and a snow warrior to defeat the penguins. The player must pelt the snowmen with enchanted snowballs to keep them alive.

In the 2016 Christmas event, Snow rangers served the same role as they did in the original 2007 event, with the addition of the ability to make them for Construction and Ranged experience after the miniquest.