From the RuneScape Wiki, the wiki for all things RuneScape
(Redirected from Snow implings)
Jump to: navigation, search
This article is about the Hunter creature. For other uses, see Snow imp (disambiguation).
Snow impling? (edit) 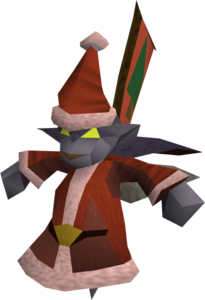 Snow implings are a festive holiday hunter creature released during the 2012 Christmas event, A Stray in a Manger. Players can hunt them for festive items. They also spawn Snowballs, saying something merry as they do so. Possible phrases it can say include "Jingle bells!", "Merry Chrimbo!" and "Ho, ho, ho!".

On 26 November 2013 the implings returned, spawning near the Helpful snow imps as part of the leadup to the 2013 Christmas Event.

On 13 November 2017 the implings reappeared as part of the Going Like Clockwork event. Catching one during the event unlocks Johnny in Daffyd's house.

Snow implings before 2017 could be caught in impling jars to give a snow impling jar. However, there was no benefit to doing so.

Snow implings during the 2017 event didn't spawn in a completely random manner, and some areas spawned a large amount of implings in a relatively small amount of time, the most notable place where this occurred was in Burthorpe.

After 'A Stray in a Manger'[edit | edit source]

These could only be found once, and could easily be found from trading the gift of giving. Players could return the four snow implings in a jar (Petey, Eddy, Lucy, and Susy) to their snow imp in any of his locations for 50,000 bonus Hunter xp per jar.