From the RuneScape Wiki, the wiki for all things RuneScape
Jump to navigation Jump to search
The Old School RuneScape Wiki also has an article on: osrsw:Snow globe
Item JSON: {"edible":"no","members":"no","stackable":"no","stacksinbank":"yes","death":"always","name":"Snow globe","bankable":"yes","gemw":false,"equipable":"no","disassembly":"no","release_date":"18 December 2007","id":"11950","release_update_post":"Christmas Event","lendable":"no","destroy":"You can get another from Diango in Draynor Village.","highalch":1,"weight":0.001,"tradeable":"no","examine":"A tiny model of Lumbridge Castle inside a glass dome.","noteable":"no"}

When a player shakes the snow globe, snow falls randomly in a 5 by 5 square centred on the player and all their free inventory spots fill with snowballs. Between 2 and 5 piles of snow fall (it will not snow in buildings with roofs). The snow melts after a while. After the event, Jagex removed the snow globe's ability to produce snow around the player. However, the snow globe will continue to generate snowballs after the 2007 Christmas event, unlike the snowballs from the previous event, which melted a short while after.

If lost, another snow globe may be obtained in Draynor Village by talking to Diango. Members can also store it in their Toy box, found in the in the Costume room of a Player-owned house.

A player shaking a Snow globe.

When shaken, the Globe can do the following:

Snowballs can be wielded and thrown at other players and used as a weapon against monsters. 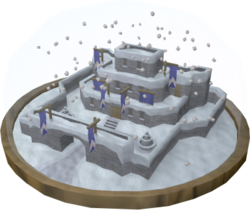 Upon the release of RuneScape HD a glitch occurred when a player shook the globe. The snow globe floated in mid-air next to them while their empty hand was shaking. This has been fixed by Jagex.

Upon shaking it, if the player does any action that can cancel an interface, they will be seen just holding the globe, without the interface showing the close-up of the globe appearing. This has not been fixed.

Once shaking and closing the interface, if you move away, the snow will still fall on the place where you've shaken it and it will stomp itself until it disappears.