From the RuneScape Wiki, the wiki for all things RuneScape
Jump to navigation Jump to search
Item JSON: {"edible":"no","disassembly":"no","stackable":"no","stacksinbank":"yes","death":"alwaysinclwild","name":"Small meteorite","bankable":"no","gemw":false,"equipable":"no","members":"no","id":"32537","release_date":"3 November 2014","restriction":"microtransaction","release_update_post":"Patch Week","lendable":"no","destroy":"Are you sure you want to destroy this meteorite? You cannot reclaim it.","highalch":false,"weight":0.1,"lowalch":false,"tradeable":"no","examine":"This meteorite can be used to give XP in a skill of your choice, granting more if you choose one of your lowest skills.","noteable":"no"}

Small meteorite is a promotional item that can be won from Treasure Hunter as part of the Meteor Storm promotion added on 21 January 2016 or received by operating any piece of the Astromancer outfit. When used it will give 33% more experience in a chosen skill than a small prismatic lamp, or 100% more if the skill chosen is one of the player's five lowest skills. If the player's Dungeoneering, Invention, and/or Slayer level is less than 120 those will count as lower than any level 99 skill. 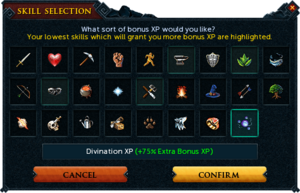 The reward interface of meteorites, with the lowest levelled skills highlighted.