From the RuneScape Wiki, the wiki for all things RuneScape
Jump to: navigation, search
Small dwarven toolbox? (edit)

A small dwarven toolbox is a toolbox that was released on 17 April 2015 as part of the Dwarven Tools promotion. It can be opened to create either a Dwarven ramhammer, Dwarven chainaxe or Dwarven fish extractor.

The tools work with divine locations, but only getting double resources stacks with the x2 loot bonus from Guthixian Caches. 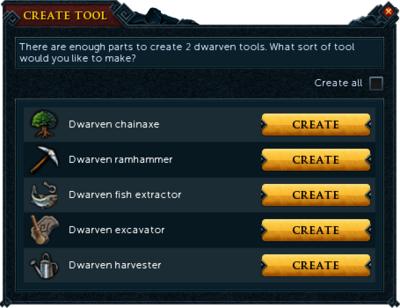 The interface for the Dwarven toolbox