From the RuneScape Wiki, the wiki for all things RuneScape
Jump to navigation Jump to search
The Old School RuneScape Wiki also has an article on: osrsw:Slug Prince

The Slug Prince is encountered during The Slug Menace quest. He can only be fought once and requires 30 Slayer to kill. The people of Witchaven are obviously very mad at you for killing the Slug Prince, as after you kill him they tell you to leave them alone. 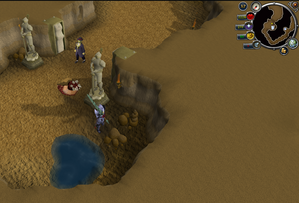 A safespot when fighting the Slug Prince. Halberds DO work.

The Slug Prince can only be fought with Melee; using Ranged or Magic is futile, as they bounce harmlessly off.

However, he is very easy, and high and medium level players can kill him without prayer or food. If you do choose to use Protect from Melee, be aware that the Slug Prince's attacks may drain Prayer.

A high or medium levelled player should have little to no problems fighting him, but lower levels might want to bring food or even prayer potions.

A ring of recoil does not work against the Slug Prince.

The Slug Prince is killed.

The Slug Prince's appearance is a small, shell-like body, with one mouthlike object protruding from the front. Its appearance is similar to that of a hermit crab.

The Prince is no bigger than the player's character and its shell appears incomplete, which might mean the prince is a larva of some sort and that there are other slugs that are Mother Mallum's size.

The Slug Prince
The music that plays when meeting the Slug Prince during The Slug Menace. It is a slightly less epic version of his mothers theme.
Retrieved from ‘https://runescape.wiki/w/Slug_Prince?oldid=35654078’
Categories:
Hidden categories: