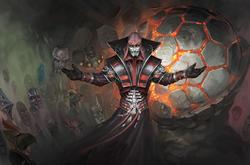 Sliske with the Stone of Jas.

The Sliske quest series is a quest series focusing on the Mahjarrat Sliske, and the "contest" he is holding between the gods over the Stone of Jas. The series starts with Missing, Presumed Death, and consists of six instalments. The World Wakes can be seen as a prelude to the series, and most Sixth Age content in general.

While the first two quests were released in 2013 and 2015 alongside a number of other Sixth Age quests, the final four quests were all released in 2016 as part of Sliske's Countdown.[1] This is to wrap up the series while it still has momentum, in a similar fashion to the Void Knights quest series and the first four quests in the Mysteries of the Mahjarrat quest series.

In Missing, Presumed Death, the player and Icthlarin discover that Death has been kidnapped by Sliske, and set out to rescue him from the Empyrean Citadel, where Sliske is gathering the gods by claiming to have ascended after killing Guthix. Once there, Sliske reveals his possession of the Stone of Jas, and announces his contest over the stone.

In Dishonour among Thieves, Zamorak recruits the player and a number of Zamorakians to try and steal the Stone of Jas from Sliske's clutches. Sliske is aware of this plan, and tries to convince the player to attack Zamorak once he is led to the stone. While Zamorak is ultimately unsuccessful in stealing the stone, he is nevertheless energised by it, and Nomad may end up stealing a part of it, dependant on player choice. At the end of the quest, players have the option of attacking Sliske alongside Zamorak, weakening him significantly, or attacking Zamorak instead.

Nomad's Elegy follows on from Dishonour among Thieves, and features Nomad. His plan to siphon every soul from all over Gielinor and its underworlds into the Soul obelisk sees the player teaming up with Death, Icthlarin, and several dead characters to lay siege to Nomad and stop his plans.

Main article: Kindred Spirits
This section is a stub. You can help by expanding it.

Kindred Spirits is the second quest in the series released in 2016. Focused on the Barrows brothers, the player will be searching for a way to break Sliske's hold on the siblings. This quest had the working name "Ballad of the Barrows Brothers".

Children of Mah, previously known as Fate of the Gods II, is a sequel to Fate of the Gods. After the player and Zaros disturbed Mah, she has awoken and is planning on creating her own universe, beginning with the destruction of Freneskae. The Mahjarrat return to Freneskae, as does Zamorak. This quest will see a confrontation between Zaros and Zamorak, the general who betrayed him.

Sliske's Endgame is the series finale. It is the culmination of his plan, reaching as far back as the Battle of Lumbridge. Sliske calls an end to his game and tallies up the scores, inviting those who killed a god - Vorago, Sakirth, and Armadyl at the time of announcement - to an event that is sure to be big and noticeable.

The event reacts to the player's choices, both during it and from previous quests and events, and generates consequences that reach beyond the quest.

Being focused around the gods, most notable characters are either gods or extremely powerful.