From the RuneScape Wiki, the wiki for all things RuneScape
Jump to: navigation, search
The Old School RuneScape Wiki also has an article on: osrsw:Sleeping bagThe RuneScape Classic Wiki also has an article on: classicrsw:Sleeping Bag
Item JSON: {"edible":"no","disassembly":"n/a","stackable":"no","removal_date":"29 March 2004","death":"dropped","name":"Sleeping bag","bankable":"yes","gemw":false,"equipable":"no","members":"no","release_update_post":"Sleeping bags and pickaxes","release_date":"27 May 2003","lendable":"no","destroy":"Drop","stacksinbank":"yes","removal_update_post":"RS2 Launched!","highalch":12,"weight":0,"tradeable":"yes","examine":"Not as comfy as a bed but better than nothing.","noteable":"no"} 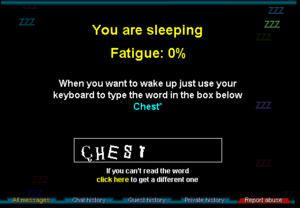 In RuneScape Classic, the Sleeping bag was used to decrease fatigue without having to journey to a bed. The player would receive one by talking to the Fatigue expert on Tutorial Island or by purchasing one from a general store for 39 coins. It would take up one inventory space, and was a very common item for players to carry everywhere. When used, a screen would appear asking the player to type in a random word to wake up. This word was displayed in distorted letters below the input line. Fatigue was an effort to create an obstacle for autoers and affected mining, fishing, and similar activities. This item was not transferred over to the new game because random events replaced fatigue in RS2, although the sleeping bag existed briefly in the beta. Therefore, it is only seen in Classic.