From the RuneScape Wiki, the wiki for all things RuneScape
(Redirected from Slayer masks)
Jump to: navigation, search
For other uses, see Slayer helmet (disambiguation). 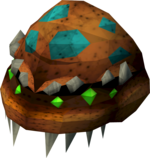 Slayer masks are Slayer equipment that can be won from Treasure Hunter, purchased from the Shattered Worlds reward shop, or purchased from Vic the trader. They provide several bonuses for players looking to train their Slayer skill, including extra experience, extra damage, and double drops every tenth kill. The mask can also teleport the player twice a day to the relevant monster's locations.

Slayer masks were released in two "waves"; the first set of helms allows a player to force a Slayer task of that creature once a day, and the second every three days. Using "Check Kills" on masks and helms with three-day cooldowns will display the time left until the task can be forced again.

Every creature killed while the mask is worn is tallied. Each mask has a set amount of kills assigned to it that, once reached, "uses up" some of the bonuses. At this point, the mask turns into a Slayer helm. The helm has similar benefits, but does not provide extra experience, extra damage, or double drops. The specific number of kills before a mask turn into a helm depends on the specific mask. The kill count continues to be tracked beyond this point, up to 999,999 kills.

A right-click option announces total kills of that creature. The announcement of total kills is seen in the chat bar and above your character by those around you. If the helm has yet to be unlocked, there’s also a message to say how many more kills are needed to do so.

After the helm version has been unlocked, the player is free to switch between it and the mask version, as a cosmetic preference only – this does not restore the extra effects of the mask. A Spirit of Battle is the only way to reset a helm back to a mask and re-enable the mask's benefits.

If attempting to use a slayer mask for a blocked task, the game will inform you of this and ask you to confirm you want it anyway. However, if you attempt to use the Mask of the Aquanites at Kuradal or Morvran while aquanites are toggled off in the Slayer Master rewards menu, the Slayer Master will automatically give you a random task without confirming you wanted one. This problem does not occur when seeking an assignment from Sumona, Duradel, or Lapalok, as they assign them normally, without having to toggle the assignment.

The update history project is a work-in-progress – not all updates to this topic may be covered below. See here for how to help out!
Retrieved from ‘https://runescape.wiki/w/Slayer_mask?oldid=35317196’
Categories:
Hidden categories: