From the RuneScape Wiki, the wiki for all things RuneScape
Jump to: navigation, search
For other uses, see Contract (disambiguation).
Slayer contract? (edit)

A Slayer contract is obtained from Markus outside of the Slayer Tower. It tracks how far along you are in your contract with him. It must be carried in the inventory for kills to be counted, and all monsters must be killed inside the Slayer Tower. 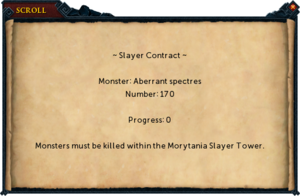 Any creatures killed towards your contract give you 20% of the Slayer experience you would have received while on an assignment. Reading the contract gives an overview of the task assigned and the progress made towards completing it. Checking it gives a short summary in the chatbox.

When the contract is completed, an orange message is given in the chatbox, stating that a reward may now be claimed from Markus. Players can choose between a combat training book (giving experience in Attack, Strength, Defence, Ranged, Magic, or Constitution) or a cash reward.

Boosts will not allow the player to obtain a contract above their original slayer level.

Extending or preferring a slayer task does not extend the slayer contract. 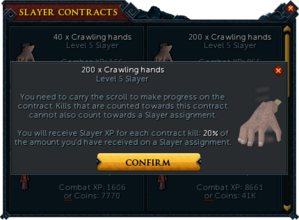 There are two different assignments available for each monster residing in the Slayer Tower. The first set offers a quick task but lower rewards, while the other set offers long tasks with greater rewards.

For the same creature, killing the higher-level or lower-level variant would also count.

The update history project is a work-in-progress – not all updates to this topic may be covered below. See here for how to help out!
Retrieved from ‘https://runescape.wiki/w/Slayer_contract?oldid=34025963’
Categories:
Hidden categories: