Sland the Green was the apprentice of Azris the Green, the master of the Green Order. He had apparently never come up with an original idea in his life,[1] and was considered to be utterly forgettable by Wizard Ellaron.[2] Despite this, he was one of eight wizards who partook in the first experiment to create a teleporation spell. However, when Unaia the Blue discovered the extent to which the Red Order had influenced the spell, she walked out, causing the spell to backfire.[3][4] Sland was killed, his soul fragmented.[5] When Ellaron the Red sought to destroy the second Wizards' Tower, the fragmented souls reacted in disgust and took Ellaron to the Abyss.[6][7] 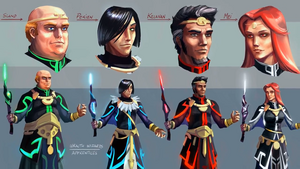