From the RuneScape Wiki, the wiki for all things RuneScape
Jump to navigation Jump to search
The Old School RuneScape Wiki also has an article on: osrsw:Slagilith

The Slagilith is encountered during the One Small Favour quest in the Goblin Cave, when the player uses the Animate rock scroll intended to free Petra from the rock face, but accidentally animates some rocks nearby. It hits somewhat hard, and has very high defence, but it does not hit very often. 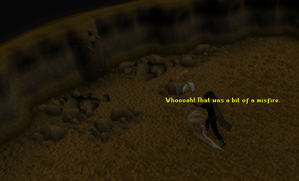 Protect from Melee is recommended as it can hit up to 260 LP, although it is wildly inaccurate. High-level players should have no problem dispatching this monster, assuming they bring a good weapon and armour. It drops adamantite stone spirit, an uncut diamond, and an uncut ruby when defeated.​

Slagilith cannot be challenged again once it has been defeated once during One Small Favour, so this monster cannot be used to repeatedly obtain its drops which sell for a good amount of money when combined.

It is recommended that you kill it with air spells, as by targeting its weakness it should not take long to defeat the creature. If you take too long to defeat it, it will disappear and you will have to start over.