Skirmish at the Cradle

The Skirmish at the Cradle was a short, but no less significant conflict that took place at the climax of the Elder God Wars. While pursuing Seren, who had fled Senntisten with the eggs of the Elder Gods in tow to prevent their destruction, the World Guardian and their allies were in turn pursued by Kerapac, who had been commanded by Jas to find the eggs.

The chase ultimately led all parties to Freneskae, where the unexpected opening of the Shadow Breach convinced Kerapac to rebel against Jas by buying the World Guardian enough time to find something on Erebus that could stop Jas for good. The World Guardian ventured into the shadowy universe and summoned a shadow leviathan, who dragged both Jas and Kerapac into Erebus.

After Zaros forcibly opened the Shadow Breach during the Battle of the Monolith, the eggs of the Elder Gods prepared to hatch. Once the Elder Gods touched the eggs and transferred their identities upon their offspring, the Great Revision would take place, whereupon the current universe would be destroyed and the Elder Gods would create a new one. Azzanadra teleported the eggs to the Grand Cathedral in the underground ruins of Senntisten, where he used the ancient elements to prevent the Elder Gods from touching them and joined forces with the younger gods to drain them of anima so as to delay their hatching. This did not go unnoticed by the Elder Gods, who rallied their servants to lay siege to the city and retrieve the eggs at all cost.

After nearly a year of ceaseless fighting, Zamorak abandoned the battle in protest of Seren's stubborn refusal to let the fight end by destroying the eggs, believing that she would sooner allow herself and her allies to be stuck fighting a hopeless battle for all eternity than allow the eggs to come to harm. As a result, the tide of the battle turned against the allied forces to the point that TzKal-Zuk was able to breach their defences and attack the cathedral directly. With no other options, Saradomin and Armadyl prepared to destroy the eggs, but Seren refused to allow that to happen and teleported them away.

The World Guardian, with the assistance of Adrasteia, Moia, Hannibus and Vicendithas, set about to chase after Seren before the Elder Gods cound find the eggs. At the same time, the party was pursued by Kerapac, who had the same goal in mind. After searching numerous worlds and repeatedly evading Kerapac, the World Guardian was able to convince him to delay Jas long enough to find the eggs and, hopefully, a more permanent solution to their predicament.

Clash of the Titans[edit | edit source] 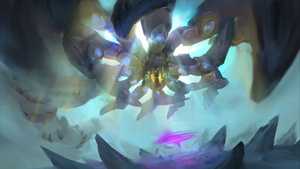 Eventually, the party was able to find Seren and the eggs in the Heart of Freneskae, where she was resting from having teleported the eggs. Before the World Guardian could reason with her, Freneskae's Shadow Breach opened in the Cradle, whereas normally it should be much further away from the planet. Seren shared her speculation that that Zaros was involved when Kerapac arrived at the Cradle, intrigued by the Shadow Breach. Jas arrived not long after and prepared to wipe out the assembled mortals, but at the last second Kerapac used the Needle to rewind time, taking advantage of the fact that Jas had only commanded him to find the eggs and neglected to give him orders on what to do afterwards.

Kerapac realised that there was no turning back anymore and directed the World Guardian to enter the Shadow Breach, aware yet disturbed at the fact that the portal's shadow anima was not harmful to them, and told them to find something, anything on Erebus that could stop Jas for good while he used the Needle to delay her return. The World Guardian complied and ventured into Erebus, where even their powers could not protect them completely. Nevertheless, after several incursions into Erebus, they were able to activate an idol that attracted the attention of a shadow leviathan, upon which they promptly returned to Freneskae with the beast in tow just as Jas reached the planet's surface. 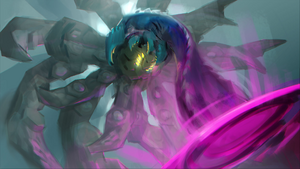 The leviathan lunges at Jas

Before Jas could kill those present, the shadow leviathan emerged from the portal and immediately attacked Jas, who was caught off guard from the entity's unexpected appearance. As mighty as the leviathan was, however, Jas was able to repel it, both beings evenly matched in power. At this moment, Kerapac intervened by using the power of both the Staff of Armadyl and the Needle against Jas, turning the odds against her. For his defiance, Kerapac was struck with unbearable pain, but he pressed on, prepared to pay any price in exchange for vengeance against his tormentor. 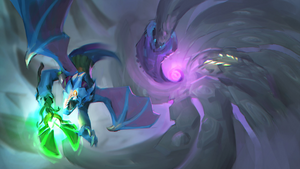 Jas and Kerapac are dragged into Erebus

His gamble paid off: with Jas too distracted by Kerapac's onslaught, she was unable to defend herself from the leviathan, which overwhelmed her and dragged her into its own realm. However, using the Needle's power in such a way proved too great a strain for the artefact, which broke into pieces. Without its power to protect him, Kerapac was also drawn into the Shadow Breach, which snapped shut once its hunger was sated.