inquisitorNone? (edit)true19 May 2009 (Update)? (edit)Yes(As pile) A looting opportunity. (As undead) No more tea-breaks for this one. (Others) "An anatomist's dream."

"Eternally looking for that big payday." "You clearly can't live on treasure alone" "A testament to the effect of greed."

Skeleton looters are found in the pyramid from the Missing My Mummy quest. The pyramid is located south of Uzer, in the part of the Kharidian Desert where protection from desert heat is advised. Once in the pyramid, this protection is not needed.

The skeleton looters are the undead remains of bandit looters who succumbed to Pharaoh Queen Senliten's curse, which slowly killed them, withering their flesh from their bones and turning them into undead beings.

The player can awaken these undead looters, who will attack. Once defeated, a skeleton looter will not respawn. 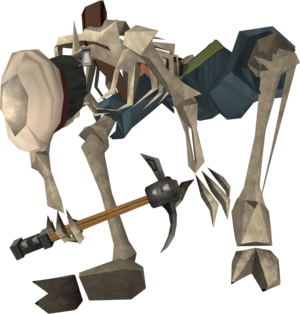 A skeleton looter, before being awakened