From the RuneScape Wiki, the wiki for all things RuneScape
Jump to: navigation, search
For other uses, see Skeleton (disambiguation).
Skeleton? (edit) 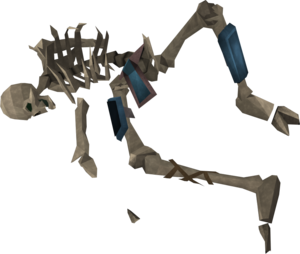 Barbarian skeletons are initially non-aggressive skeletons scattered around the Ancient Cavern. There are, in total, three skeletons that can be rummaged throughout the ground floor[UK]1st floor[US] of the cavern.

Messages and rewards when rummaging skeletons:

"You rummage in the sharp, slimy pile of bones in search of something useful..."

Be aware that rummaging a skeleton may result in the player taking 2000 or more damage.