From the RuneScape Wiki, the wiki for all things RuneScape
< Skeletal horror
Jump to: navigation, search 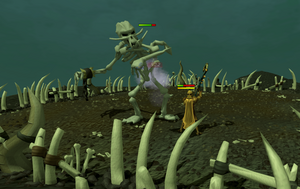 While in combat, both arms and tail will detach, reducing the combat level and effectiveness of the horror. Bury the fallen bones from your inventory after picking them up, if the detached parts are not disposed of then they will reattach to the horror, healing it and restoring its combat stats.

If players die fighting the Skeletal horror, their tombstone will appear outside the entrance to the stairs leading to the battle; players can retrieve their items from their tombstone if they can make it back in time. Since you can only teleport once per week with the bonesack/ram skull helmet, another fast way to make your way back is by using Sliske's invitation box.

For every 12,500 damage dealt to the Skeletal Horror, an appendage will be thrown to a corner of the battlefield. First the right hand will fall off, then the left hand, and finally the tail. Bury the fallen bones from your inventory after picking them up or they will fall out of your backpack and heal the Skeletal horror; more information below.

It is possible albeit difficult to kill the Skeletal horror without burying any of the appendages.

The skeletal horror can be dangerous if unprepared, or for lower level players. It will not attack you with the attack style that you are praying against (e.g., if praying against Magic, it will use Melee, and vice versa), so high healing food such as monkfish or sharks are recommended.

Despite being a monster made from the bones of dead creatures, it is not considered undead, and therefore is unaffected by the salve amulet or salve amulet (e).

The suggested way to kill this monster is to use Magic, as the Skeletal horror is most notably susceptible to magic attacks. Magic armour also provides excellent defence against both of its attack styles.

Additionally, running clockwise around the arena while manually casting abilities can be used to avoid most if not all damage.

If Melee or Ranged combat is preferred, it is suggested to use the highest level weapon(s) and armour you feel comfortable risking, as the skeletal horror is more resistant to these styles than magic. Protection prayers or Deflect Curses are highly recommended.

If you find the fight is still too difficult, a dwarf multicannon can be placed in the arena to provide additional damage. Dreadnips and Summoning familiars such as a Beast of Burden with extra food or a Unicorn stallion with Unicorn Stallion scroll (Healing Aura)s can be of additional aid as well.

The healing and defensive buff from the Enhanced Excalibur makes it a handy accessory for the fight.