From the RuneScape Wiki, the wiki for all things RuneScape
Jump to: navigation, search
Hooded manSkaldrunFrozen figure? (edit)? (edit) 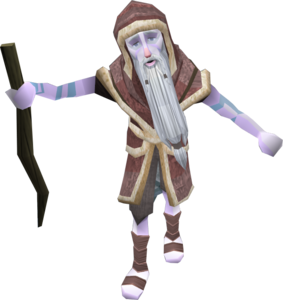 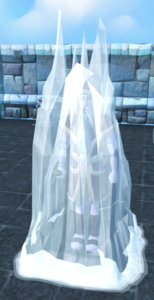 Skaldrun is an immortal cursed storyteller from the Fourth Age, recently rescued from Daemonheim by the player. He tells stories in a mix of questing and Dungeoneering, called Fremennik Sagas. The player is able to find him by entering the Frozen floors in dungeoneering, with at least complexity 2 activated. They will find him frozen in ice as a Frozen figure, and will be required to unfreeze him. Some wood or runes for any fire spell is needed to do so.

After you unfreeze Skaldrun, you can find him again at the camp. He is west of the Rewards Trader and Thok of Daemonheim. You will find him north of the fire.

In the sagas, the Signature Heroes Ariane, Ozan and Sir Owen appear in the game for the first time. The sagas have various skill requirements, but if the player doesn't have these skills, it is still possible to play an abridged version of it. In that version, only a small part of the reward and the storyline will be given, but as the sagas are replayable, it is still possible to come back with the full requirements and get the full reward and storyline.

When you talk to him at the camp he says that he remembers chronicling life in Daemonheim for someone. He mentions a collection of journals, being torn apart and scattered across the dungeon. He can't remember exactly for whom he did this, he thinks he did it for "a man".