From the RuneScape Wiki, the wiki for all things RuneScape
Jump to: navigation, search
Wikipedia also has an article on: wikipedia:Sköll 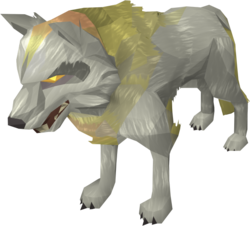 Sköll is a powerful wolf spoken of in the folklore of the Fremennik people. According to their beliefs, Sköll's goal is to eat the sun,[1] and is the brother of Hati, a wolf whose goal is to eat the moon. Should both succeed in their tasks, The End of Things will begin.[2] Until Sköll is successful in his mission, the Fremennik believe him to be responsible for causing the extreme heat of summer. Sköll is said to be stronger and more agile than his brother, drawing strength from the strong northern winds.

Vitharr wishes to summon Sköll, when he is at his strongest – which occurs in the January of each year, starting in 2012 and returning in every subsequent year, up to and including 2019 – in order to defeat him and rid the Fremennik of the threat of the two wolf brothers. By doing so, she hopes to show the brothers that the Fremennik cannot be bested at any time of year, thus deterring the brothers from attacking the citizens. To summon Sköll, Vitharr advises players to build a bonfire as intense as the sun, so that Sköll is drawn to the realm to investigate.

Like his brother Hati, who drops the Hati paws, Sköll has a unique drop: a pair of Sköll boots, which grant a large amount of bonus Woodcutting or Agility experience. In addition, Sköll can also drop a cosmetic Sköll amulet once defeated.

Sköll doesn't count as a wolf for Slayer assignments.

To summon Sköll, players must first add logs to the nearby bonfire, which is located just outside of Rellekka, far west of the south entrance. A total of 120 logs are needed to summon him, and any logs used in Firemaking can be used. The fastest way to build the bonfire is to chop logs at the area, but they can also be brought from your bank. When adding different types of logs (for example, normal logs and oak logs), you have to click and add them separately. Another arguably faster method is to bring a noted stack of logs and run from the bonfire to Sigmund the Merchant in the Rellekka Market, where you can trade the noted logs to him and buy unnoted ones back.

As Sköll is summoned he exclaims, "Låt skyarna falla!", Swedish for "Let the skies fall!" and four rocks will fall in the area around him. Fires will light between the rocks, enclosing a square around him. Anyone inside this area when the fires are lit will be trapped, with the only method of escape being teleporting or climbing over the rocks at the corners of the square. The option to climb the rocks does not currently appear when using the NXT client. After a few seconds, the meteors will explode, causing a large amount of unblockable damage (400-1000, possibly more) to anyone inside. Players outside the fires will not be able to attack with melee until the fires disappear, while ranges and mages can safely attack him from outside the flames. This attack can also be avoided by clicking out of the area immediately when the meteors fall but before the flame barriers appear.

At any point after initially spawning, he can teleport closer to the bonfire or the player he is targeting and use his flame attack again, yelling "Ni kan inte fly!" which is Swedish for "You cannot flee!", with the same mechanics as when he uses it initially.

At any point during the battle, Sköll may summon 2-5 level 42 Fenris wolves that will be aggressive to any nearby players, exclaiming "Kusiner, kom och ät upp dem!" which is Swedish for "Cousins, come and eat them up!" as he does so. Killing them is optional, and it is recommended that they be ignored.

Besides his special attacks, Sköll attacks with fire wave, fire strike and a melee pounce attack. He does not approach players to melee them, similar to metal dragons. Mages and rangers are therefore recommended to stand out of his melee range, but beware of his summoned wolves. It should be noted that his magic attacks are quite rapid (once every 2.4 seconds, or 4 game ticks, or the speed of wands) and very accurate.

Higher-levelled players should have no difficulty in defeating Sköll, as while he is significantly stronger than his brother, he is still rather easy, with his large life points and flaming rocks special attack being his only true strengths. This being said, he should not be underestimated, and lower-levelled players may have some difficulty with him, and thus are advised to fight him on a populated world. Fighting as a group is advised regardless of your level, as his large amount of life points make the fight time-consuming when done solo.

Protect from Magic/Deflect Magic, sharks or rocktail and good armour are advised to make the fight easier, especially for those with a lower combat level. Making any hit on Sköll (even just a 1) will qualify you for the chances of getting the boots. However, the lower you hit, the higher the chance that you will have to fight Sköll again to get the boots. Sköll is weak to fire spells, as hinted by Vitharr, making Magic the advised attack style. However, he can still be easily hit with any form of combat.

A good tactic to defeat him is to first let the barriers that surround Sköll explode, avoiding the 500+ damage that can be dealt, then attack him. Be aware that Sköll can also teleport around, but won't stray too far from his original spawn point. Sköll will use his flaming barrier attack immediately after teleporting; be sure not to get caught in it. A good way to avoid this attack is to range or mage him among the dead trees and tree stumps, as Sköll never teleports into them.

Another tactic is to go to world 2. There are usually a large number of players that mass Sköll, and he can easily be defeated in 10–15 seconds.

As with Hati, anyone who participates in the fight may receive the Sköll boots and amulet.

The Jormungand ring can also be obtained from Sköll, or any of the other legendary wolves. It can be handed to Eir for either Prayer for Divination experience.