From the RuneScape Wiki, the wiki for all things RuneScape
(Redirected from Sixfeetunder)
Jump to: navigation, search
This article is about the RuneScape Classic glitch. For the duplication glitch from crashing servers, see server crash glitch.

The Duplication glitch was the most famous glitch of RuneScape Classic, exploited on 7 November 2003. Its effects continue to have an impact on the economy of RuneScape today. Before the glitch, Pink Partyhats (Now called Purple Partyhats) were the most expensive partyhat. Following the glitch and continuing today, they are one of the least expensive. 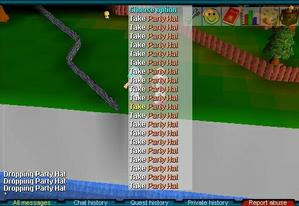 This led to a crash in the price of many rare items and the effect this has had is still visible to today in certain items. Many people do wonder what the price and abundance of the rare items would be like if the glitch was never found, as the glitch brought in hundreds of illegitimately acquired rare items. Because of the glitch, the purple partyhat remains one of the cheapest of them all, despite originally being the rarest and most expensive partyhat.

Although Jagex soon found out about the glitch, they could not immediately do anything to fix it, as they themselves did not understand the process behind the "duplication". Several days of item duplication made a massive change to the RuneScape economy as players started to duplicate other, less valuable items such as ores. Eventually, Jagex offered a lifetime RuneScape membership for whoever could tell them how the bug worked, with multiple players coming forward and explaining it to them. This allowed for Jagex to disable the glitch.[1] Only the first player to reveal how the glitch worked was rewarded.[2] Although they understood what the long-term effects of the economy in RuneScape would be, Jagex refused to rollback the game.[1]