From the RuneScape Wiki, the wiki for all things RuneScape
Jump to navigation Jump to search
Sir Vile? (edit)

Sir Vile was an egocentric Kinshra spymaster planted inside the order of the White Knights under the command of Black Knights' Fortress, his former home. His time spent amongst the White Knights eventually led to him renouncing Zamorak and formally joining the White Knights. Nomad joined him as an acolyte in order to keep up-to-date with the activities of the newly returned Gods, but later killed him after learning of his betrayal.

Memories of him appear during the Tales of Nomad miniquest, which show him conversing with Nomad in the White Knights' Castle courtyard, and being pushed off a cliff, killed outside the Black Knights' Fortress. Nomad remarked him as weak and largely brainwashed by White Knights since his joining. 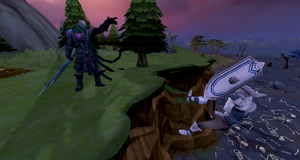