From the RuneScape Wiki, the wiki for all things RuneScape
Jump to: navigation, search
The Old School RuneScape Wiki also has an article on: osrsw:Sir Leye 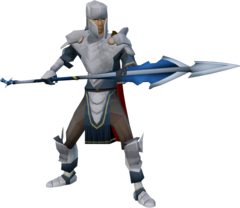 Sir Leye is one of the Temple Knights that test your skills during the Recruitment Drive quest. You must fight him as a woman, using no armour, weapons, food, prayer or potions. This is due to a famous legend stating that Sir Leye had been blessed by Saradomin himself, and that no "man" can defeat him. If your character is male, you can damage him as much as you want, but even if his life points reach zero, they will automatically reset to its maximum, making him invincible.

However, if you try to kill him as a female character, his life points won't reset back, effectively killing him. There is no guarantee you will have to fight Sir Leye during the quest, Recruitment Drive, as he is one of the 7 tests that are chosen randomly every time you re-enter the testing grounds.