From the RuneScape Wiki, the wiki for all things RuneScape
(Redirected from Sir Gerry)
Jump to: navigation, search
The Old School RuneScape Wiki also has an article on: osrsw:Knight (Sir Gerry)
KnightSir Gerry 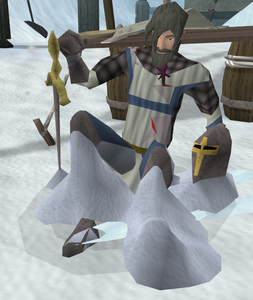 A dying Knight, also known as Sir Gerry can be found struggling to stay alive outside the God Wars Dungeon.

In the Year 169 of the Fifth Age, tectonic activity in the deep Wilderness north of Asgarnia caused subterranean heating in the eastern fringes of Troll Country. In a snowy, ruin-dotted wasteland north of Trollheim, this heating affected a frozen cavern beneath the remains of an ancient temple left untouched since the ancient God Wars.

The Temple Knights, tipped by a Drunken Dwarf, realised that the now-thawing inhabitants were part of a battle that had been frozen in time over 2,000 years ago. Fearing that the inhabitants could escape from their icy prison, the Temple Knights sent an elite unit of highly-trained soldiers to the dungeon in an effort to assess the situation. Unknowingly taking the route of dwarven explorer Nestor Peregrine, they descended into the last remains of the war that nearly destroyed the world.

Prior to his death, Sir Gerry was able to relay little of what happened within the depths of the caves. The sole survivor of the doomed mission, Gerry lay severely wounded amongst the crumbling masonry of the temple on the surface. Here, freezing to death and threatened by the native ice wolves, Gerry wrote a letter detailing what they had learned of the God Wars Dungeon.

Players, should they visit the area above the dungeon, can speak to Sir Gerry before he dies. Giving them the letter, he instructs them to deliver it to Sir Tiffy Cashien in Falador Park. Players can read the letter, which briefly describes the battle and the treasure for which it is being fought, the Godsword. Once players deliver the letter, Sir Tiffy will pass it on to his superiors. This yields no reward.

Upon returning to the temple ruins, they will find the knight dead, overcome by his injuries.

Transcripts Knight (Sir Gerry) is the author or co-author of: