Sir Ceril Carnillean is a wealthy and famous nobleman in East Ardougne, and is the head of the Carnillean Family, a noble family whose ancestors drove Hazeel from power in the late Fourth Age. Carnillean lives south of Ardougne castle in Carnillean Mansion with his wife, Henryeta Carnillean, and their spoiled son, Philipe Carnillean. He appears alongside other residents of East Ardougne in the Ratcatchers Mansion.

Ceril is having issues with "crazy" cultists that are breaking in, having stolen some of his family heirlooms. An adventurer passes by, and he hires them to investigate the cult on his behalf. Prior to the start of this quest, Ceril had another butler called Higson, who died in his sleep after following them to the cultists' hideout. After Higson's death, another butler appeared immediately, who called himself Jones. Ceril did not think of anything suspicious and hired him.

If the adventurer helps Ceril, they will find that Butler Jones is part of the cult and tells him about it. They are unable to find any proof at first, so Ceril dismisses them as a scoundrel and demands they leave his mansion. The adventurer eventually discovers poison and an amulet of Hazeel, showing it to a shocked Ceril, who has Jones arrested for burglary and attempted murder. He then apologises to them for his actions and compensates them in gratitude.

After the incident, Ceril hires a new butler, called Crichton.

Sometime after the Cult of Hazeel was dealt with, Ceril looked to his son, Philipe Carnillean. He had tried to set him up as an up-and-coming mature nobleman, but much to his and Henryeta's dismay, such attempts failed. He attempted to hire the renowned adventurer Xenia to help shape Philipe, but she declined his offer after investigating the underground system beneath his mansion. The adventurer passed by again and he explained to them that he and his wife are getting old, and that they need Philipe mature to represent the Carnillean household.

The adventurer sets up Ceril's quest, but when they bring Philipe down, they encounter an unusually large wolf that attacks them. Philipe defeats the matriarch and after the "quest" is finished, Ceril is informed of the wolf. He is surprised why the adventurer would place something dangerous inside, but Crichton assures him that it was not there when they were setting up the quest. Much to his delight, Philipe had quickly matured and became an aspiring adventurer, before seeing Xenia outside and orders the adventurer to get rid of her.

The adventurer then confronts Xenia, who told them that she had stunned the wolf beforehand as Ceril's "quest" had no danger and would bore his son. Xenia's intervention had caused Philipe to become curious about the outside world and opened the world of adventuring to him.

The quest reveals that Ceril holds somewhat low views of what he considers to be savages, such as the Mountain Tribe and goblins. 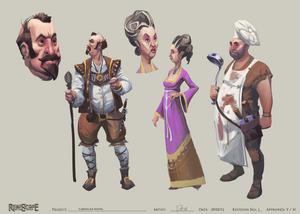