Sins of the Father

From the RuneScape Wiki, the wiki for all things RuneScape
Jump to navigation Jump to search
For the achievement, see Sins of the Father (miniquest) (achievement).

Sins of the Father is a miniquest on Anachronia which unlocks the Effigy Incubator Distraction and Diversion. It is a sequel to Desperate Measures and involves working with Kerapac's son, Vicendithas.

Start the quest by talking to Mr Mordaut at the Anachronia base camp.

Talk to Eliza and Alpheus and talk about Kerapac. They are located by the Anachronia lodestone.

Go north out of the base camp. Walk down the stairs (not the Agility shortcut) and enter the area with the igneous jadinkos. You should see a message about something looking "out of place." You must trigger this dialogue to progress.

Walk up the first stairs to the north then west on the green area to the dragonkin statue until your character remarks about something feeling different. If this does not happen, then the first message about things looking "out of place" likely did not trigger. In this case, go south of the igneous jadinkos and walk a few steps until the message appears.

Investigate the bottom part of the dragonkin statue and enter the door that is revealed.

Descend down and talk to Vicendithas to start the tutorial. 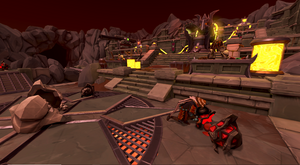 Talk to Vicendithas. You will be directed to a number of resource piles scattered around the room and a pile of effigy casings. Gather from a pile associated with your preferred skill (Runecrafting, Smithing, Invention, or Crafting) until you have obtained 20 resources from that pile, and then go to the middle of the room and pick an effigy casing.

Talk to Vicendithas again, and then proceed to one of Kerapac's workbenches to construct your effigy.

Talk to Vicendithas once more after the tutorial to complete the miniquest. 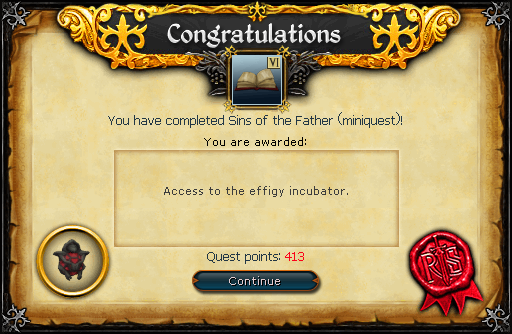 Sins of the Father is directly required for the following quests/miniquests: