The Shipyard is a ship-building facility on the east shore of Karamja and south-east of the Karamja lodestone, built under the discreet supervision of Glough to raise a navy capable of attacking the human population of Gielinor. It is first visited by players completing The Grand Tree, and subsequently plays a role in Monkey Madness. Entering the Yard requires the player to speak the password (Ka, Lu, Min) which is obtained during The Grand Tree quest.

In the yard you will find many level 28 Shipyard workers and many ships under construction. There are also some hammers lying around. 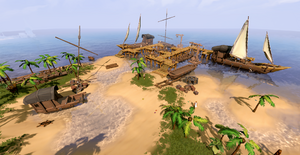 Ships under construction in the Shipyard.

A destination for a level 3 Treasure Trail coordinate clue is located just east of the hut.

Off the coast, players can occasionally see a shark. Though it is level 1, it is not attackable.