From the RuneScape Wiki, the wiki for all things RuneScape
Jump to: navigation, search
Shining large prismatic lamp? (edit)

A shining large prismatic lamp is an uncommon item that can be won on Treasure Hunter during the Shining Prismania promotion. It can be rubbed for experience in a chosen skill, destroying the lamp.

It yields 70% extra experience compared to a regular large prismatic lamp, and has an unknown chance for the experience to be further doubled.

When you have multiple lamps in your inventory, you are given a selection on which one to use. 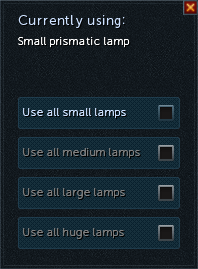 The interface that appears if you have more than 1 prismatic lamp.

The following table lists the amount of experience received from the lamp for any given skill level for regular skills if the doubling does not happen and it is used on a skill that is boosted for the day.