The Shilo Village mining site is one of only two places at which players can find precious gem rocks (the other place being the Al Kharid mine resource dungeon). 3 rocks are available for mining on the surface, with an additional 14 underground. The Shilo Village quest must be completed in order to gain access to the surface mine.

The mine is located in the northwestern part of Shilo Village, in Karamja, and is a short distance from the bank. The gem rocks will give one random uncut gem when mined, either an emerald, a ruby, or a diamond. It is also possible for a Shooting Star to land at the surface gem mine.

Carrying a gem bag can greatly extend the amount of time at the mines. If wearing the ring of wealth, once it shines brightly two gems will be mined from one rock instead of the usual one gem.

The location of the entrance to the mine 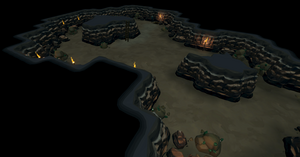 The underground gem mine is only accessible to players who own Karamja gloves 3.

Players who have completed the Karamja Diary may use their Karamja gloves 3 to teleport directly to the gem mine for free an unlimited number of times. Furthermore, they will get access to the underground portion of the Gem mine, which has an additional 14 Gem rocks and contains the entrance to the gemstone cavern.