From the RuneScape Wiki, the wiki for all things RuneScape
Jump to navigation Jump to search
Not to be confused with Chi. 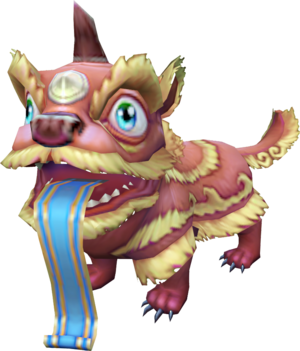 Shi are guardian lions created by Kami-shima, an island in The Shield region of the Wushanko Isles.

They were sprung into existence during the battle with Kakashi. With Kakashi defeated, his weapon's anima was returned to Kami-shima, and the island chose Sojobo, Kami and Honovi as its guardians. The three newly-appointed guardians befriended the many shi guardian lions that roam across Kami-shima.[1][2] Kami adopted a shi cub whom she named Fraji, after Aagi's mother.[3]

The Tengu knew about these creatures from Gu folklore.[1]

In one of the A Joint Acquisition voyages, the Memory and the Occultist sail to the tiny island of Nokami to retrieve a secret cache of plate and chi being guarded by a shi that they befriended.[4]