Sheep Shearer is a miniquest and former quest. It was one of the six quests available when RuneScape was released, and features Fred the Farmer tasking the player with shearing his black sheep in order to collect 20 Balls of black wool.

The starting point of the quest. Fred the Farmer is the man with the straw hat.

To start the quest, talk to Fred the Farmer, who can be found in his house North of Lumbridge, just North of the Lumbridge Market. Tell him that you're looking for work, and Fred will task you with collect 20 balls of black wool from his black sheep. He will also warn you to watch out for 'The Thing', which he says is a black-hearted shape-shifter who hungers for souls.

If you already bought balls of black wool from another player or the Grand Exchange, you can hand them in and complete the miniquest immediately. If you can't buy them, or would prefer not to, you can gather them yourself.

To find the sheep, leave his house and climb over the stile on the fence to the West of it, which will take you into their pen. The pen is home to two black sheep. To shear the black sheep, simply click them, and your character will shear them, although there is a chance that the sheep will run away, if this happens, try again. As there are only two sheep, after you have sheared both of them, wait a few seconds and their wool will grow back, allowing you to shear them again. 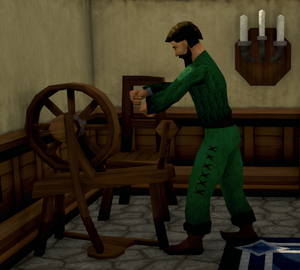 Keep doing this until you've obtained 20 pieces of black wool, then go to Lumbridge Castle and go up the stairs to the 1st floor[UK]2nd floor[US]. The spinning wheel is found in the room South of the one that Duke Horacio resides. Spin the wool on the wheel, and then return to Fred. If you do not have the space to carry all 20 balls of wool, you can make smaller deliveries until you reach the required total. Fred will thank you for aiding him, and he will reward you. 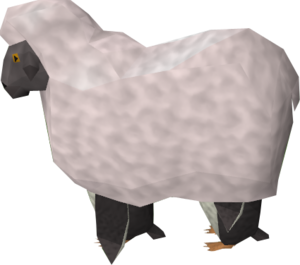 The two penguins disguised as a sheep
Retrieved from ‘https://runescape.wiki/w/Sheep_Shearer?oldid=35680089’
Categories:
Hidden categories: