From the RuneScape Wiki, the wiki for all things RuneScape
< Shattered Worlds
Jump to navigation Jump to search 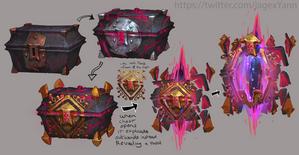 There are a variety of rewards that players can buy with shattered anima, which is obtained while and after clearing levels of Shattered Worlds.

Players may earn shattered anima by entering a world and killing mobs in said world. They will drop random amounts of anima which is automatically collected. Every 5 worlds, the player will land on a reward island, which contains two portals to exit or continue the minigame. It also contains a bank chest and a reward chest which gives extra shattered anima.

The higher worlds you reach, the tougher the monsters become, and the more shattered anima you'll receive from said mobs and reward chests. Therefore in order to gain a lot of shattered anima, the player should reach higher worlds. Starting with world 200, killing 75% of the mobs will cap at ~1,200,000 shattered anima per world henceforth, but the reward chest at the end will still increase in amount as the worlds increase. Anima earnings from a goebie kill also caps at ~1.2M anima/goebie starting at world 200 - meaning goebies become ever stronger and more dangerous, but the reward amount stays the same.

The location of the Abyssal Knight Quartermaster

The rewards below can be bought from the Shattered worlds reward shop with Abyssal Knight Quartermaster. This can be found right outside the main portal. Alongside the rewards below, players can also find an Abyssal hound after opening a reward chest. It is a very rare drop from the reward chest: X/150,000 drop rate after every 5 worlds completed, where X is the final world completed multiplied by 5.[1] 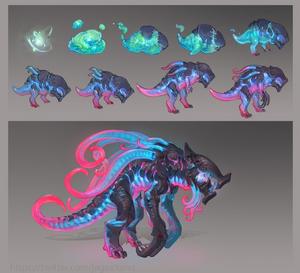