From the RuneScape Wiki, the wiki for all things RuneScape
Jump to navigation Jump to search
The Old School RuneScape Wiki also has an article on: osrsw:Shanty Claws

Shanty Claws is a werewolf sailor dressed as Santa Claus who appeared in the 2006 Christmas event. Shanty could be found on the west dock of Musa Point, and asked the players to rescue the "childernapped childerkins" Jack, Jill and Jeff from the gublinch in their lair under Karamja Volcano. This was accomplished by pelting the gublinch with snowballs, turning them into gublinch shards. After players brought the shards to Shanty, he imprisoned the Gublinch in cages on his dock, and the childerkin were freed. Shanty rewarded players with a Reindeer hat and a Wintumber tree for their player-owned house.

Shanty Claws no longer appears in-game, but did continue to make appearances in Postbag from the Hedge for several years after he was removed. In Postbag from the Hedge 17, he revealed that his ship is called The Seahound, and that he is not the same kind of werewolf as found in Morytania, but rather a sailor wolf (Canis aquos). He claimed that his family had been sailors for generations, and that the Claws family "goes back to the wars", although he did not discount the possibility that he is distantly descended from Morytanian land werewolves.

A song would occasionally play while speaking to Shanty Claws.

Shanty Claws song
The original version of the song, heard in the 2006 Christmas event.

Shanty Claws song
The current version of the song, left unused in the game files. 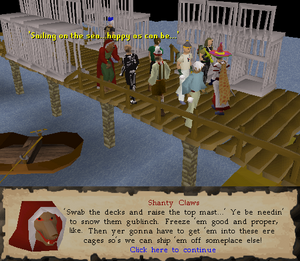