The Shaman's outfit is an experience-boosting set acquired via Treasure Hunter, starting with a promotion on the Squeal of Fortune from 16 to 26 August 2013. Each piece grants 1% bonus Summoning experience when worn. When all of the pieces of the set are worn, a 1% set bonus is added, providing a total bonus of 6%.

From 6 March 2017, shaman outfit parts could be obtained from the box of summoning ingredients reward from Familiarisation - this is also available to ironmen.

The outfit can be freely reclaimed from Diango, Ianto, or Azibo when destroyed or lost on death.

During the original promotion, in order to obtain pieces of the set, the player must combine 100, 200, or 400 spirit wolf blood (depending on the type of wolf bone) with a spirit wolf bone won on the Squeal of Fortune. When this is done, the spirit wolf Mohegan will appear and award the player with an amount of Summoning experience, equal to a medium prismatic lamp, and a piece of the shaman's outfit corresponding with the piece of bone used. If a spirit wolf skull is combined with wolf blood, the player will also receive the Fang of Mohegan necklace, which, when worn, has a chance to double charm drops. The full set requires 1000 wolf blood and one of each wolf bone.

It was possible to own more than one of each Shaman's outfit items at a time by winning one directly from SoF and obtaining another one by using the won spirit wolf bone and spirit wolf blood.

After the promotion's ended, the Shaman's outfit parts became a possible reward from the Squeal of Fortune, appearing in rare slots. 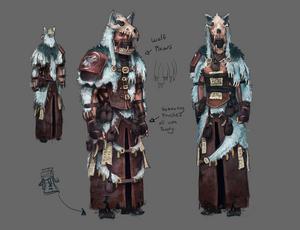