The Shadow silk hood is a piece of headgear found within the dungeons of Daemonheim. This item is only dropped rarely by a night spider, which are found rather frequently on Hard Mode and 5:5 large floors. The Shadow silk hood requires 45 Defence to wear.

A player wearing the shadow silk hood is invisible to any humanoids that are not mages, necromancers, or bosses. 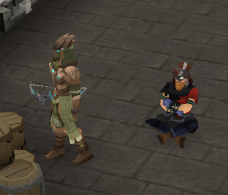 The effects of a shadow silk hood.

Not only can mages and necromancers detect a player wearing the hood, but they can cast a spell that makes the player visible to all humanoids for a period of time. They will cast this spell immediately upon spotting a player with the hood. Reborn mages will cast this spell upon engaging a player wearing the hood. The spell lasts longer if cast by a higher level mage and can last for a few minutes. The exception is skeleton mages, which can attack you but cannot cast the spell to render you visible. The spell looks the same as the Lunar spell Stat Spy.

When attacking a humanoid enemy from an invisible state, the player does not become visible to other humanoid enemies in the room. This means that it is possible to clear a room of non-mage humanoid enemies one at a time. Additionally, even if there are non-humanoids in the room that can see you, the hood allows you to kill these enemies first while the humanoids leave you alone.

Monsters that can disable the effects[edit | edit source]

If the player still has concealment, the first attack of these monsters will be the anti-cloaking spell, which temporarily removes the player's concealment. Protect from Magic/Deflect Magic cannot prevent this from happening. If the monster is still alive when the spell wears off, it will cast the spell again.

Some people will use a powerful weapon and shadow silk hood as soon as they are allowed to use two binds; however, others prefer binding the highest tier platebody they can wear instead of the hood, particularly if they prefer solo dungeons, although this wouldn't be recommended if a player trains Dungeoneering in groups. Once you have access to 3+ binds, a bow and arrows will generally benefit you more than this item.

Overall, it is up to the player whether they should bind the Shadow silk hood over something else. Defence and Prayer levels should be taken into consideration, since those are the two skills that help a player "tank" several monster(s) in a single room. For example, if a player has 90 Defence, they might opt to bind a platebody over the hood since they can withstand more damage per minute, whereas a player with 60 Defence might want to bind the hood instead, because they cannot wear a higher-tier platebody, nor can they withstand as much damage per minute. Players should keep in mind that in general it is better to bind a platebody, as updates have made the hood much less useful.

At the start of each dungeon and each time the hood is equipped, the message "You are now concealed under your hood" appears in the chatbox. If two hoods are bound, equipping the hood in your inventory gives the same message; however, when the visibility spell is cast, switching the hood does not cause this message to appear. Therefore, it is no more useful to have two hoods bound than one, since switching hoods does not negate the spell that removes concealment.