Shadow of the Storm

Shadow of the Storm is an intermediate quest that continues the plot of Demon Slayer. It involves the villain Denath once more, as well as his group of followers.

A sinister group of dark wizards is attempting to summon Agrith-Naar, a demon of exceptional mystical power.

Rather than try to prevent them, a Saradominist priest asks the player to help summon the demon and then kill it once and for all.

Speak to Father Reen, who is just south of the Al Kharid bank. He will tell you about a group of dark wizards, led by a man named Denath, who are attempting to summon an evil demon, Agrith Naar. When you offer your services to stop the summoning, Reen tells you that he already has another plan. He wants you to help the wizards with the summoning and then kill the demon once and for all. He directs you to see Father Badden in Uzer for further information.

Bring Silverlight (he will provide you with one if you don't have it) and a vial, plus 3 pieces of a black outfit (see below), since you will need them in Uzer.

Travel to Uzer, which is east of the Dominion Tower. You can take a magic carpet there for 1000 coins (or 375 coins with the ring of charos and whether you've played the Rogue Trader activity before). An enchanted broomstick from Swept Away is especially convenient for reaching Shantay Pass, and for doing the quest itself, due to its ability to bring the player near both a musician and a bank, but also near the area of the quest.

Blending into the dark[edit | edit source] 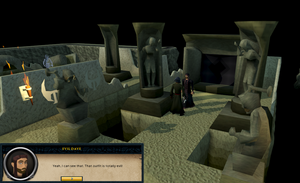 Evil Dave requires that you wear an 'evil' outfit before he lets you through the portal.

In Uzer, talk to Father Badden. He will ask you to infiltrate the dark wizards who have made base inside the Ruins. Enter the basement below the temple ruins, and speak to Evil Dave near the northern part of the basement, and ask to join his clique.

Evil Dave won't let you in if you aren't wearing at least three pieces of black clothing, because "you aren't evil enough".

You must wear any three of these items to appear "evil enough" for Evil Dave to let you pass:

The following will NOT work: 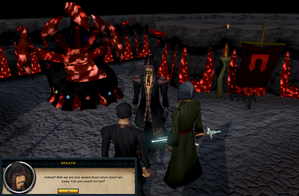 Denath and Dave welcome you to the order.

Also note that if you try to go through with some weapons such as a Saradomin sword or silverlight itself, Evil Dave will say that your outfit looks evil, but he "won't have any silver glowing swords in here".

Talk to Evil Dave again, and ask to join the cult. A cutscene will start, showing Evil Dave leading you to the leader of the group, Denath.

Denath will accept you into his group because another member, Josef, has disappeared. Denath will tell you that he needs your help to summon Agrith Naar. He will also tell you the incantation to use, which is different for everyone, so you will need to remember it. One possibility is to type the incantation into the chat box.

If you haven't done so, stock up on potions and food for your final battle with level 84 Agrith Naar. You no longer need your black outfit to enter the portal. The demon uses magic and melee attacks, so one good strategy is to load up on melee-protection armour. For example, dragon armour and Protect from Magic/Deflect Magic together. If you were already wearing black dragonhide armour for your three pieces of black clothing, you can also range the demon; the dragonhide will protect you from taking too much damage from the demon's magic spells. Prayer potions may be necessary.

Return to Uzer, enter the demon's lair again, and talk to Matthew. He will tell you about Josef and a book he had found. Go back outside, and talk to the clay golem. They will tell you that Denath killed Josef, but not before Josef hid a large book in one of the broken kilns. Make sure to talk to the clay golem, otherwise you won't get the "look" option while trying to search the kilns.

Look in the kilns around Uzer (do not forget to check the one north of the magic carpet, and the one to the east of the temple) to find a demonic tome. You will also now find Father Reen standing outside the temple's ruins. If you want, you can have an interesting discussion with him about his religion.

Read the book, then return through the portal and discuss the content with Matthew. Matthew notes the incantation for summoning the demon that's written in the book is backward to the one that Denath told you to say.

Calm before the storm[edit | edit source] 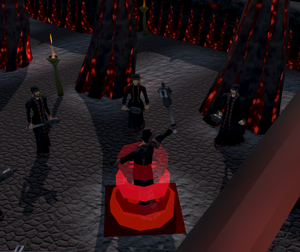 Denath steps into the circle and returns to his home plane.

Denath will now call you over to take your place and lead the incantation; using your sigil, chant it in the order that Denath told you (you can ask Denath for the incantation in case you forgot).

After finishing the incantation, Denath walks to the centre of the magic circle, and disappears. You realise that Denath was Agrith Naar all along, and you actually desummoned him by saying the incantation backward. This particular demon is much more powerful in his own dimension, so you need to resummon Agrith Naar to defeat it.

Pick up the sigil that Denath dropped, as you will need multiple sigils. You will have to make another one if you forget to pick it up. Evil Dave, Eric, and Tanya will run away. Chase after them through the portal. 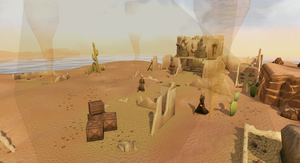 The sandstorm at Uzer.

When you exit the portal, you will occasionally take small amounts of damage from falling rocks in the basement and in the sandstorm outside in Uzer.

Tanya will be killed by the ghosts in the basement, so pick up her sigil. Talk to Evil Dave, who will tell you that Eric was killed by a collapsed ceiling and will give you Eric's sigil; tell Evil Dave to return to the lair. Go up the stairs and talk to Father Badden and Father Reen, and give them each a sigil.

Talk to the clay golem and try to convince them to help you - the clay golem says that they were programmed to never enter the demon’s portal. Go back into the basement, take the strange implement from the north-west corner, and use it on the golem to take out the scroll. Talk to the golem again, and they will agree to help you now, taking the final sigil.

If you forget to pick up a demonic sigil, you can make another one with a silver bar and the demonic sigil mould. 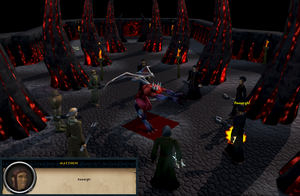 Go back into the demon's lair, and talk to Matthew to get everyone to stand in the circle. Take your place in the circle, and use your sigil to chant the incantation in the order you read in Josef's book (it is the same as the previous incantation, just backwards). Agrith Naar will appear in the circle, enraged for being summoned. He will kill Matthew, and then move to attack you.

By default, he uses melee up close and casts Fire Blast at a distance. If you use protection prayers, he will automatically use the alternate attack style. Agrith Naar can hit into the 200s and 300s with both styles. However, the demon is extremely easy for his level - a player with level 70 combat, and good armour, should be able to finish him easily, with little need for food. 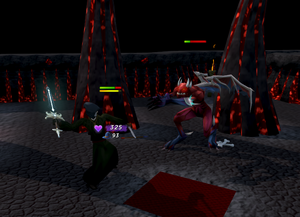 The battle with Agrith Naar

Agrith Naar does not have any weakness, so any attack style will work against him, although the final blow must be made by the Silverlight, regardless of what weapon you have equipped. As such, melee is recommended over ranged or magic. If the final blow is dealt with any other weapon, Agrith Naar will regenerate some of his life points. If Agrith Naar dies from poison, it will still count as a kill provided you have Silverlight equipped. A dwarf multicannon cannot be used to attack Agrith Naar.

When the demon is dead, a message will then appear telling you that the demon's blood has merged with your Silverlight, turning it into Darklight.

You will then be able to choose the skill you wish to receive experience in. If you accidentally perform an action to make the message disappear (for example, turning off a prayer or walking away), un-equip then re-equip Darklight to make it re-appear. 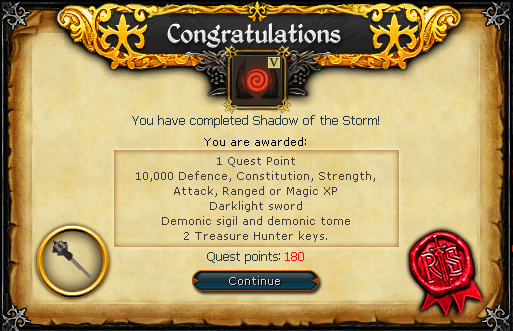 Shadow of the Storm is directly required for the following quests/miniquests: