Shades of Mort'ton is a quest dealing with the strange affliction to the townspeople of a small village named Mort'ton. The player uncovers an old cure for the affliction and must help the village. It is difficult to complete this quest alone, players may try to visit world 88 and do it together with other players.

Much like the Elemental Workshop series, this quest is not started by an NPC, but rather, the player's own curiosity, and is contingent upon further exploration.

This quest can be done in any world, but as getting the temple to 100% repair is difficult on their own, players should consider using World 88, the official Shades of Mort'ton world. This will allow you to repair the temple quicker and easier with more players, as it is more difficult to do the temple repair by yourself.

Players will need to gather all items needed for the quest before going to Mort'ton, because there is no convenient opportunity to bank during the quest. Unless players have completed the quest In Aid of the Myreque and finished restoring the Burgh de Rott bank, the bank south of Mort'ton will not be functional and should not be relied on. Thus, a Beast of Burden familiar can help by carrying items.

Without access to the Ancient Magicks or another advanced methods of quick transport to the area, players will need to arrive fully prepared. If players use their last dose of Serum 207 before completing the quest, they will need to obtain more tarromin. More tarromin can be obtained by killing Afflicted for grimy tarromin, but this is a rather uncommon drop, so bringing extra tarromin is recommended. 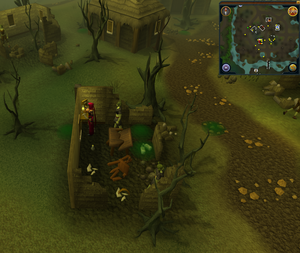 The building where the quest is started.

To start Shades of Mort'ton, enter the southernmost building in Mort'ton, which is a ruined house with lots of broken glass and vials. Search the shelf on the wall to find the Diary of Herbi Flax, which begins the quest when read.

Right click and search the smashed table to obtain two tarromin herbs and one rogue's purse herb. Both tarromin herbs will be used later, so keep them. Pick up the empty vials, which spawn inside the house where you found the book. Fill the vials with water at a sink in a house on the eastern side of Mort'ton.

Read the book, which explains how to make Serum 207, a potion that cures the afflicted for a short amount of time. The ingredients are a vial of water, clean tarromin and ashes. If the player has no ashes, they can chop down one of the local trees and burn the logs, then pick up the resulting ashes. The potion will be used to cure the affliction of the townspeople, so that the player can talk with them.

Make two potions and use a dose on Razmire in the general store. Ask Razmire about the shadowy creatures and he will tell you they are Loar shades and that his stock of building supplies have been put away because the town is overrun with them. He instructs you to kill 5 of them. The shades are green in colour and are level 58. In order to complete Razmire's request, you need to kill the shades and pick up the 5 remains. Any shades killed before talking to Razmire will not count. 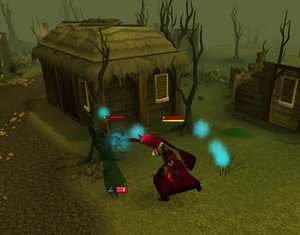 Killing a Loar Shade for Razmire.

After killing 5 shades, bring the 5 remains to Razmire. Razmire will probably be afflicted, so another dose of Serum 207 is necessary. Razmire will take two remains off you to experiment with, and will now let you use his shop.

Go into the house south east of the General Store. Use the serum on Ulsquire Shauncy, who is said to be a priest who may know how to lay the shades to rest. Talk to him, and he will take one set of Loar remains. Wait a moment after giving him the remains, then go through all the chat options available.

He explains that the remains should be laid to rest in the Temple of Mort'ton, referred to as Flamtaer. This is done through a holy cremation, using pyre logs (logs treated with sacred oil). However, sacred oil can only be obtained by rebuilding the temple. After talking to Ulsquire, head back to Razmire.

Ask Razmire to open the general store and the builder's store. Buy at least one vial of olive oil, 10 timber beams, 10 limestone bricks, and 50 swamp paste. Beams and bricks must be paired, and for every pair the player will need 5 paste. Keep in mind that the temple is built by players, so more or less resources may be needed, depending on the condition of the temple. Optionally, buy a flamtaer hammer for 13,000 coins, and you will construct the temple faster. 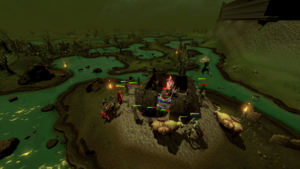 Repairing the temple with other players on World 88.

The temple is on the north-east coast of Mort'ton, on a little island across a small bridge. Use the beams, bricks, and paste to repair the Temple of Mort'ton. Crafting experience is gained from repairing the temple.

Flamtaer bracelets can help in the construction of the Temple Walls. The bracelet comes with 2 charges, and when the effect activates, it can instantly build the wall. It is suggested to have multiple bracelets, especially if soloing the activity. Shade luring dummies can be used to distract the Loar Shades when repairing the temple. The temple is maintained fairly often on world 88, the official Shades of Mort'ton world, but at times it will be deserted even on that world. Using shade luring dummies, flamtaer bracelets, and a flamtaer hammer makes it possible, although somewhat difficult, to repair the temple without the help of other players, although asking friends for help may be preferable.

Once the temple has reached 100% repair status, the sacred altar in the centre will become functional with a puff of smoke. Light the torch that appears on the altar with a tinderbox. You will need at least 20% sanctity, which you can get by killing the Loar Shades that attack the temple or by rebuilding and/or re-enforcing the temple. While killing shades, players only get sanctity for actual kills, and sanctity level is constantly drained. AoE attacks can speed this process up, to combat the constant drain.

Once the fire altar is lit (which can only happen once the temple is fully repaired), use the olive oil on the flame to make sacred oil. Although optional, is it helpful to also use the Serum 207 on this flame to make it into Serum 208, which will permanently cure an afflicted, especially useful on Razmire. Blessing anything on the altar uses an amount of the player's sanctity percentage. Blessing olive oil uses about 10% per vial, whereas blessing Serum 207 uses 20% sanctity.

Serum 208 will permanently cure both Razmire Keelgan and Ulsquire Shauncy. However, using it on one of the 'afflicted' NPCs will register as a kill, and the NPC will eventually respawn, re-afflicted. When afflicted NPCs are given a dose of either serum, they give the player random items. A full list can be found here or here for Serum 208. 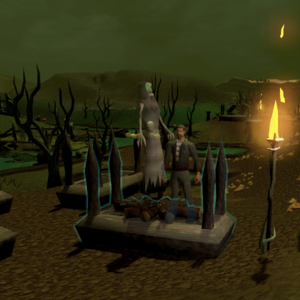 Now you need to create pyre logs, which are obtained by using sacred oil on any type of logs. The easiest type of logs to obtain is normal logs, by chopping nearby trees.

Use the sacred oil on logs to create a pyre log. Basic wood will use only two doses of sacred oil, but higher types of wood (such as maple logs) will use more doses at a time. Take the pyre log and a set of loar remains to a funeral pyre, which are the sets of four stone beds around the edge of the town. There are some located south-east of Ulsquire's house.

Use the pyre logs on the funeral pyre, then use the loar remains on it. Quickly light this to cremate the shade (if you wait too long, the remains and logs will disappear). You will see the spirit of the shade rise from the pyre, and receive an amount of both Prayer and Firemaking experience. As the spirit departs, a gift of thanks will appear in your inventory. The rewards will be either a stack of coins, or a shade key. Head back to Ulsquire.

Use your serum on him, if you have not permanently cured him with Serum 208 yet, and speak to him to finish the quest. 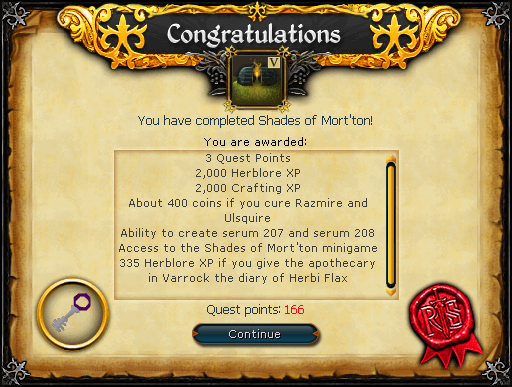 Shades of Mort'ton is directly required for the following quests/miniquests: