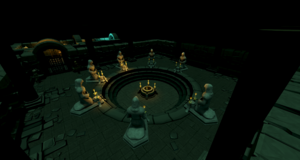 The warriors also blessed the River Salve in year 1200 of the Fourth Age, creating a barrier to prevent Morytanian invasion in the future. This blessing has held, although there have been several instances of crossing through various methods. The warriors remain some of humanity's most universally celebrated historical figures, although they are most frequently referenced in Misthalanian lore and history. Their exploits have been compared to those of the Barrows Brothers, who died near the Sanguinesti Region in the late Third Age. Their prominence is such that Gielinor's calendar system uses adaptations of the warriors' names as days of the week. Corresponding with Sunday to Saturday, they are, in order: Ivanday, Caistleday, Duneday, Gullday, Erysail, Twiblick, and Essianday. It is revealed that the Seven Priestly Warriors were in fact Temple Knights while talking to Historian Minas in the Varrock Museum about them after the In Aid of The Myreque quest.

During the quest River of Blood, it is revealed that the seven were able to bless the river through blood magic. Drezel, the custodian of Paterdomus, believes that it was Saradomin himself that did so, and any word otherwise would be blasphemy. However, a book in the secret basement of the library and notes hidden in the tomb of Ivandis reveal that it was, in fact, the seven to do the blessing. While completing the ritual, all but Ivandis were killed, which he believed helped to increase the strength of the ward even further. Afterwards, it was revealed that the ritual had come at a grave cost, and he had begun to experience symptoms not unlike vampyrism. Ivandis sought a cure for a long time, but tried many catalysts through trial and error, coming to the conclusion that the ashes of a Blisterwood tree would be his only hope. Eventually, Ivandis feared he had become too far gone and, because he did not know of the tree in what is now Darkmeyer, decided to end his suffering by approaching the River Salve. This was the end of his notes in his journal, alleging that he did die.