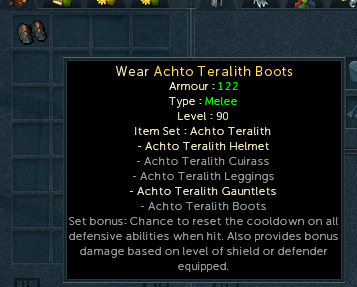 A set effect listed in the item tool tip; white names mean the item is accounted for.

Set bonuses are passive effects that are only given as a bonus for wearing multiple pieces of the same equipment set. Items with set effects have the effect described in a tool tip when the item is hovered over.

This article documents all pages with an explicit in-game tool tip describing the set effect. All other items with set effects are described in the passive effects article.

Void Knight equipment has a set effect, directed by the combat class of the worn helmet, that increases the user's damage and accuracy in the chosen style. The set effects do exist after the update of 30 April 2013, although unlike regular offensive gear, the combat bonuses of Void equipment remain invisible.

Power armour offers a larger damage increase than Void and has higher Armour bonuses, but it does not aid accuracy.

Obsidian armour with the warrior helm

Obsidian armour works as standard non-degradable All-classed gear on the surface world, but it degrades and offers special effects in the TzHaar City and its three minigames. It will heavily reduce all damage taken there, including damage from other players (PvP in the Fight Pit). This damage reduction is cumulative of each armour piece, for a reduction of 55% when wearing the entire set and 45% without the kiteshield. One can receive a further 10% reduction by donating TokKul at the Fight Cauldron, which will also reduce the rate of degradation. The effect lasts for 20 minutes, and one may donate thrice to extend the duration to a whole hour.

All pieces of armour have an initial 4000 charges before being completely degraded. They have a chance to lose charge from any hit taken in the TzHaar City.

As of 5 October 2015, both versions of crystal armour have a variety of set effects.

At 3 pieces worn, each hit taken has a chance of activating Tarddian Fury, dealing damage to the attacker. The chance is increased per piece worn, to a maximum of 5% for regular and 7.5% for attuned. This ability has a cooldown of 3 seconds between activations. The damage is based on both ability damage and Agility level and is equal to (Ability damage * Agility level) / 300

At 4 pieces worn, whenever Tarddian Fury activates, it removes stuns and bleeds.

At 5 pieces worn, each hit taken or each skilling Seren spell cast has a chance trigger Harmonious Resonance for 10 seconds. This increases Crystal Mask duration by 1 minute, Crystallise duration by 15 seconds, removes prayer drain from Seren prayers and causes aurora spells to trigger their effects twice per activation, causing Opal, Emerald and Ruby to provide double timer and stacks respectively. Sapphire Aurora is not affected. This effect is exclusive to the Attuned Crystal armour.

The armour also increase the maximum amount of tarddian crystals and crystal fragments obtained by 1 per piece. It also increases the chance of obtaining the Ancient elven wedding ring. The more pieces worn, the higher the chance, with attuned armour being doubly effective.

Wearing the full set of Penance armour (Hat, Torso, Skirt, Boots and Gloves) will make the player’s prayer points increase automatically at a rate of 30 points per minute. It should be noted that with a boosted amount of prayer points, the restore effect of the penance armour may lower it. It renews to the player's normal amount of prayer points, so the boost will be lost when the first prayer restore occurs. Neither the horn or trident are necessary to gain the set effect. The player needs only to be wearing the fighter torso, penance skirt, penance gloves, runner boots, and any of the hats.

The set effect works with any combination of standard pieces and their hardened upgrades, obtained with the Barbarian assault armour patch. This allows players to maintain the set effect even if only some pieces in the set have been upgraded.

This information has been compiled as part of the update history project. Some updates may not be included - see here for how to help out!
Retrieved from ‘https://runescape.wiki/w/Set_bonus?oldid=35793249’
Categories:
Hidden category: