After launching the RuneScape Game Client the client must first perform a loading process connecting players to the RuneScape download server. In this process, the game client and Jagex cache files are downloaded and stored partially on the player's hard drive and in memory.

This is the list of servers as of 30 November 2022, including Jagex-defined world themes, server location, P2P/F2P status, and whether or not LootShare is enabled on that world. The Locations of the RuneScape servers

It is recommended that players connect to the server closest to them, or that has a ping number of less than 100, as they will experience more reliable connections and less lag. However, this is not mandatory.

When viewing a players world on the friends list, friends chat, or clan chat, a flag of the country the server is intended for will be displayed next to the world number they are logged into. In some instances, a different flag is shown when a player is logged into:

The worlds are only recommendations; players may still use any world they want to perform most activities. The exception to this is LootShare which is only available on the appropriate themed worlds. Oppositely, Jagex only allows players with the appropriate levels to log in to a Skill total world. Players who log into the Quick Chat world are restricted to communicating solely from the quick chat menu.

Worlds where only players who have Premier Membership are allowed to enter. It is denoted by this flag: (

Worlds where players gather in the Grand Exchange to trade a variety of items. Players also gather at Manor Farm to sell animals.

The notice received when logging into a Role-playing world

Legacy Only and EoC Only worlds restrict the player to using either Legacy Mode or Evolution of Combat only. Legacy Only worlds require the use of the Legacy interface and cannot be accessed on RuneScape Mobile.

Instance shard worlds is a world sharded off from the rest of the servers and is used for certain Distractions and Diversions & minigames, and Clan Citadels. For example, when a clan member opens a citadel by teleporting to it from the clan camp, Jagex creates it in a separate "instanced" server. The citadel will exist on this world for any clan member who enters, but will close when the last member leaves. It will be created again, on a world assigned by Jagex, whenever it is needed. Teleporting is not allowed when on these worlds. 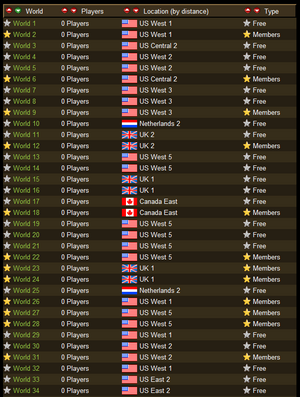