From the RuneScape Wiki, the wiki for all things RuneScape
Jump to navigation Jump to search
Serenity posts location

Serenity posts are an Agility training method located in the Hefin Clan district of Prifddinas. Access to this activity requires level 75 Agility and completion of the quest, Plague's End. While not an official Distraction and Diversion, this training activity can only be completed once per day, and progress is reset daily at 00:00 UTC.

Players can begin this training method by locating the posts found in the Hefin Clan district around Lady Hefin. Players can use the Prifddinas lodestone and travel north, or may use the Hefin teleport on the crystal teleport seed (or its attuned variant) and travel south. Players are required to stand on any of the six posts. Then they must choose one of four poses from the minigame interface. The four stances are: Bow, Crane, Lotus, and Ward. 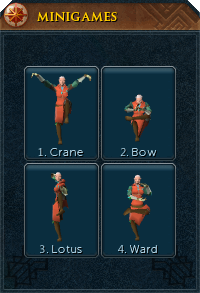 Available stances for the Serenity posts 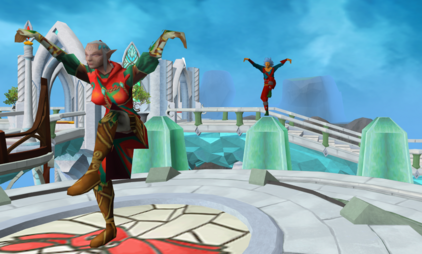 Using full attention, players can match Lady Hefin's poses accurately and reach the daily 20,000 Agility experience in 10–15 minutes. Some players prefer to select one pose and wait until the cap is reached, regardless the rate of experience. This strategy takes usually 20–25 minutes, but is the least click intensive Agility training in the game.

A few skilling actions can be performed while on serenity posts with only a minor interruption to Agility training (which occurs during the interfaces). Examples include grinding mud runes, but not fletching nor casting High Level Alchemy.