Seren Memories is an achievement that requires the player to find all four of Seren's memoriam crystals and claim the Crest of Seren override on Freneskae after Fate of the Gods.

The four Seren crystals can be found in a special area in the Approach which cannot be reached until Fate of the Gods has been completed, since a bridge is formed when a pillar is knocked over by Mah's awakening.

Players will be in an area with four pillars and four inactive crystals. One of the pillars will be active, and can be tagged. Tagging 80 active pillars will unlock all four crystals. Leaving the area and coming back will reset the count to 0, so it is best to bring enough supplies to remain in the area to tag all 80 pillars the first time. The strikes of lightning appear to get more frequent the longer you stay around the pillars. 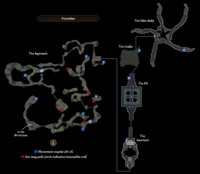 After tagging all 80 pillars and retrieving all four crystals, players must activate the Memoriam device in the centre of The Sanctum then search the Storage to the west to unlock the achievement.

This information has been compiled as part of the update history project. Some updates may not be included - see here for how to help out!
Retrieved from ‘https://runescape.wiki/w/Seren_Memories?oldid=35714702’
Categories:
Hidden category: