From the RuneScape Wiki, the wiki for all things RuneScape
(Redirected from Seren's Council)
Jump to: navigation, search 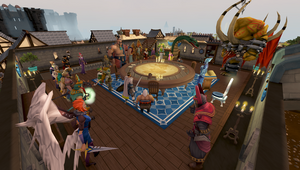 Seren's council was organised with the first summit of leaders being called by the Elven goddess Seren in Year 7 of the Sixth Age. The council was held on the 1st floor[UK]2nd floor[US] of Burthorpe Castle.

Each participant was summoned during the Song of Seren event that preceded the release of Desperate Times.

Following the events of Sliske's God Wars and subsequent Endgame within the Heart of Gielinor, the Elder God Jas revealed herself and spoke to the World Guardian, giving them an ultimatum - prove to the Elders that life was worth preserving, or the Elders would proceed with the Great Revision. Upon hearing this, Seren spent much of her time in Prifddinas looking for a way to appease the Elder Gods. Months later, she gathered a vast array of people from across the world by amplifying the Song of Seren across the planet, directing them to the neutral ground of Burthorpe.

Once all the dignitaries arrived, she began with an impassioned plea to the council, begging them to set aside their differences and work towards the common goal of saving all life in the universe. She asked to first appease the elder goddess Bik, who was particularly fond of nature. Her idea of a grand garden on Gielinor, free from civilisation and godly interference was shot down multiple times, due to different factions refusing to cooperate.

During the debate, the dactyl dragonkin Kerapac crashed into the scene. He explained that he was not here to fight, but to help. He and his fellow kin had tried to appease the Elder Gods, and were enslaved and bound to the Stone of Jas because of it. Now having destroyed the Stone, he wished to aid the planet in fending off the Great Revision. His plan was to use The Needle, an Elder Artefact capable of manipulating anima into new timelines, to trick the Elder Gods into falling asleep permanently, believing it was not yet time to wake up. In his words, the Elder Gods feed off anima, he is going to poison their supply. Save for Seren, the council voted unanimously with Kerapac's plan, and Thok Thokson of Daemonheim and the World Guardian were tasked with aiding Kerapac.

The World Guardian returned later to inform the council of Kerapac's betrayal - he had stolen The Needle with its power and intended to destroy the planet and everyone on it to defeat the Elder Gods. The council agreed that Kerapac had to be stopped before it was too late, with even Seren, normally a pacifistic soul advocating for the traitorous dragonkin's death.