Seers' Village is a small settlement to the west of Camelot. The city of Ardougne is to the south, and Rellekka and Sinclair Mansion are to the north. A combination of a spinning wheel, a flax field and many rare trees make Seers' Village a central location to the Fletching trade. The village was originally settled by the Seers, a collection of humans with the ability to see the future, though over time their numbers have dwindled. The village still has quite a large population of Seers and is ruled by the Seers' Council. An Achievement Diary for the village was released on 20 January 2009.

In the past, Seers' Village was the location for the Party Room; however, after the release of King's Ransom, its location was changed to Falador in order to make room for the courthouse, allowing free players to use it as well.

There are multiple ways to get to Seers' Village: 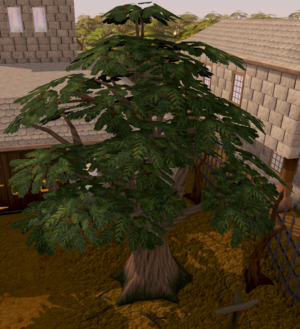 Yew trees outside the chapel are a popular woodcutting spot because of their proximity to the bank.

The Seers' Village bank used to be a very popular trading spot. Most Fletching items (such as flax and bowstrings) used to be sold here. The bank was also a trading arena for Treasure Trail rewards and rare items. Trading was drastically reduced after the introduction of the Grand Exchange. 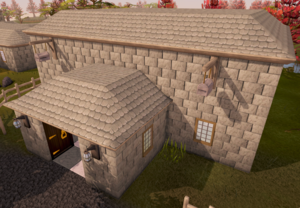 The Bank in Seers' Village.

Seers' Village is a popular Woodcutting destination. Within the village and its surrounding area, there are 11 yew trees, 7 magic trees (near Sorcerer's Tower and Ranging Guild;) 7 maple trees, 10 willow trees, and multiple oak trees and Trees.

Located to the south-east of Seers' Village is a large flax field for picking flax which is used in Fletching. Located conveniently just north-west of here is a small house with a spinning wheel on the second floor which can be used to spin flax into bowstrings. Until the trading limit updates, this field used to be crowded with macroers.

The Beehives near the Flaxfield.

The beehive field is located south-east of Seers' Village. It's just to the east of the Flax Field. As suggested by the name, it contains many beehives. Players can collect Buckets of wax and Honeycombs from these. The beehives are used during Merlin's Crystal, in which you have to use insect repellent (found in Catherby) on a hive.

The Graveyard in front of the Saradomin Altar.

The Saradomin Altar is located in the church north-west of the Flax Field. Inside the Graveyard located at the front of this altar are several Yew trees for Woodcutting. Praying at the Altar with the Seers' headband 3 will give a 20 extra Prayer points on top of the player's maximum.

The Poison salesman loiters in or around the pub and plays a role in The Fremennik Trials, and Murder Mystery quests.

The local pub is one of the target bars in the Bar Crawl (miniquest). It is also a common place for players training their Ranged skill due to the fact that there are many level 2 Men and Women in the pub with many tables to prevent retaliation.

North of the bar is a small building with several coal trucks inside it. From here players can retrieve all of the coal mined from the Coal Trucks, providing it was loaded into the carts at the Coal Trucks. A coal cart can hold up to 120 coal. This number can be increased if Seers' headband 1, 2, or 3 is worn.

To the west of Seers' Village, McGrubor's Wood is used in Fishing Contest and Plague City. The residents will not let players through the front entrance so players will need to squeeze through some railings at the back. Players are advised to be careful as level 44 guard dogs patrol the area.

Located south-east of the bank, the courthouse is instrumental in King's Ransom. Here a player defends Anna Sinclair, and strives to achieve a non-guilty verdict. With the release of the quest, the Courthouse replaced the Party Room and many players had complained about this change. However, as the Party Room was moved to Falador, it is now accessible by free players.

The Cages in the Western Part of Seers Village.

Located in the Western part of Seers Village and East of McGrubor's Wood. It is used in the Random Event, Pillory.

Next to a bunch of trees right near the flax fields, players may see raccoons and baby raccoons. The babies can be caught with a box trap at level 27 Hunter. This raccoon may then be kept as a pet with level 80 Summoning. Attached to the flax field are some beehives where players may obtain a Honeycomb, an item needed to make a Honey badger pouch. Insect repellent is required to prevent damage to the player.

The willow trees behind the bank are a good place to obtain Willow logs to make a Beaver pouch and, if one is lucky, a nest might fall out. Within a nest, players have a chance of discovering either a Raven egg or any of the other Bird's eggs, which when hatched, give a Zamorak hawk, a Saradomin owl, or a Guthix raptor.