From the RuneScape Wiki, the wiki for all things RuneScape
(Redirected from Sebastian Gno)
Jump to navigation Jump to search
The Old School RuneScape Wiki also has an article on: osrsw:Speedy Gnome 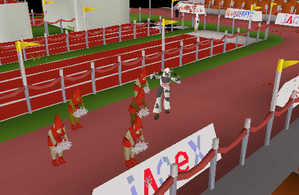 The area in which the random event takes place

Sebastian Gno, the fastest gnome in the world.

Speedy Gnome was a scrapped random event mentioned in a Behind the Scenes article in August 2005. It was to be released alongside several other random events such as the Sandwich lady. In the event, the player would have been kidnapped and forced to race against Sebastian Gno, the "fastest gnome in the world", in an agility course modelled to look like an Olympic stadium with obstacles.

However, Sebastian Gno was not added to RuneScape along with the rest of the random events named, because the course was the same every time and was therefore not an effective anti-bot feature. The random event was scrapped, despite having completed graphics and testing.[1]

A unused song called "Athlete's Foot" was added to the archive of MIDI music files contained within RuneScape on 4 May 2005, intended for the Speedy Gnome event. Jingles were added for the random event too, for when the player completes or fails it. Sebastian Gno's model was later added to the game files with the release of battle tortoises on 24 April 2006.