From the RuneScape Wiki, the wiki for all things RuneScape
(Redirected from Seasonal hiscores)
Jump to: navigation, search 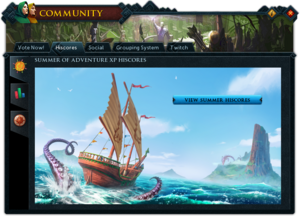 The interface for Seasonal HiScores

Winners are rewarded with the Crown of Supremacy which eventually becomes the Crown of Legends. Along with the crown, players also unlock an emote and a new title corresponding to the competition that they won.

The Seasonal HiScores include a free-to-view Application Programming Interface (API) which can be used to track ongoing hiscores and archived hiscores.

Each competition lasts a varying numbers of days, and has a set number of "cycles" before it ends. There have been many different types competitions since the HiScores were released.

There are currently no active Seasonal HiScores.

There are three rewards that can be received from winning a Seasonal Hiscore. Those who come in first receive a Crown of Supremacy which eventually becomes a Crown of Legends, and emote called Round of Applause. The top 100 players in a competition also win a title corresponding to the competition that they won, with the one in first place receiving a gold version of the title.

After winning, the Crown of Supremacy becomes available in your customisation screen. It is a cosmetic override which means that it is not a physical item, and therefore cannot be tangibly equipped. You are only able to have it for as long as you remain as rank one on the most recent competition. After that, you would lose the cosmetic override and instead get the Crown of Legends override, which looks similar, but without the green glow and with a simpler design.

A player performing Round of Applause.

Round of Applause[edit | edit source]

Any winner of a seasonal hiscore temporarily unlocks the Round of Applause emote, which involves three citizens cheering for, applauding to and worshipping its performer. This emote will not show up for most people on their emotes tab, only for those that have won the competition.

Players in the top 100 of the hiscore receive a grey version of the hiscore's title, and the winner receives a gold version. The winner also received The Supreme title.