From the RuneScape Wiki, the wiki for all things RuneScape
< Sealed clue scroll (hard)
Jump to: navigation, search

There are two major methods of acquiring hard clue scrolls in bulk. The primary method used by many is killing hellhounds, and the secondary method is pickpocketing from elven clan workers, with there being many other alternative slower methods such as using the Prosper perk while skilling, which can gather beyond the soft cap of 25 sealed clue scrolls.

The best way to farm hard clue scrolls in large numbers is by killing hellhounds in the Taverley hellhound resource dungeon, requiring level 55 Dungeoneering. Your ability bar should consist of mainly abilities able to hit multiple targets, such as Corruption Blast, Chain, and Dragon Breath.

Magic is the ideal style for killing hellhounds quickly because of the added AoE provided, especially with the Caroming and Planted Feet invention perks.

With the prayer restore of the Demon horn necklace and the Bonecrusher, you will be able to sustain Soul Split and Turmoil indefinitely. Those without either the equipment or prayers may use alternatives such as Vampyrism aura or Blood amulet of fury in combination with Protect from Melee/Deflect Magic and Piety. Failing all else, the Guthan's set can give an effective amount of healing, at the cost of much slower/fewer kills.

An Oldak coil can significantly speed up the rates as it will generally be capable of hitting 7 of the hellhounds in the dungeon, and hits up to 3 targets per cannonball used. A regular dwarf multicannon can also be used, but is significiantly slower because it lacks the AoE ability of the coil, only hitting 1 target per cannonball and taking time to turn.

Elder overloads are optional but significantly speed up kill rates. Similarly, either a Brawler demon pouch with Ring of Fire scrolls, or a Smoke devil pouch with Dust Cloud scrolls can be used optionally to increase the amount of AoE damage done and speed up kills. Do not use aggression potions as they have a smaller aggression radius than simply leaving the area and re-agroing will give; this can be accomplished quickly by using the Dungeoneering cape teleport option 9.

The whetstone is used to repair the helm, gloves, or boots if they are degradable and break during gathering. 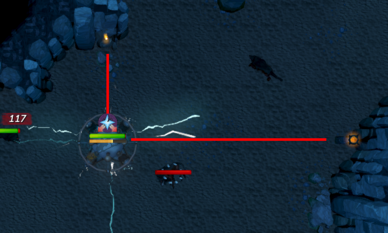 With the camera facing south, align the coil placement with these two torches, and stand underneath it.