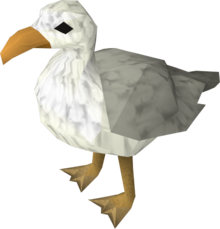 Seagulls are small birds commonly found on Port Sarim. Their low max hit and life points make them a prime target for beginners.

Seagulls are also a good way to start training prayer or money making, as their drop of bones can easily be deposited at the Entrana Monk's deposit box to be sold or buried later.

The seagulls are a fairly unusual race and play major roles in the pirate quest series. In order to communicate with the seagulls, a moderately high Summoning level is required to understand what they are saying. The primary seagulls encountered in the quest have titles of nobility (e.g Count Ludwig Koppenploppen and Baron von Hattenkrapper). Seagulls also have standards of their own similar to humans.