From the RuneScape Wiki, the wiki for all things RuneScape
Jump to navigation Jump to search
The Old School RuneScape Wiki also has an article on: osrsw:Sea slug (species)
This article is about the species. For other uses, see Sea slug (disambiguation). 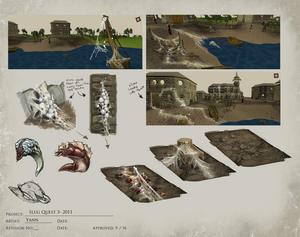 A sea slug (Opisthobranchia alucinor) is any one of a species of slug-like creatures that are able to control the minds of humans and other living beings by latching onto them. However, they are not too fond of heat, and their victims will pass out if they're exposed to enough heat. They are ruled by Mother Mallum.

Varrock Museum has some sea slugs on display in its Natural History department, which is in the basement. The Apothecary in southern Varrock also seems to have a sea slug pickled in a jar.

The sea slugs are first met in the Sea Slug quest, whilst investigating the disappearances of Kent and Kennith.

Luckily, Kent and Kennith escaped before being possessed themselves.

The sea slug shrine called the Pillars of Zanash in RuneScape Classic.

The next step in their plans was to free their leader from the prison in which the Temple Knights had sealed them a few hundred ago. They arrived at Witchaven when Kennith got mad at Kimberly for losing his toy train. Mayor Eustace Hobb announced he would be renovating the shrine to the west.

Soon villagers began to become possessed and the mayor began to act strangely. The Temple Knights of Falador wanted to know why. Investigating, the adventurer discovered their plans of releasing Mother Mallum but was tricked into assisting them. However, the adventurer managed to kill the Slug Prince before barely escaping Mother Mallum's possession attempt.

The rest of the population became possessed by the sea slugs and the town became the first to fall to the sea slugs. The villagers began mining for rubium.

It seems as though the Temple Knights did not wish the danger of the sea slugs to reach the public, as the display in Varrock Museum describes them as "harmless", though researchers who tried to further investigate the slugs disappeared.

With the defeat of Mother Mallum during Salt in the Wound, all of their victims are now free, although their exact fate is unknown.

It is revealed in the Hunt for Red Raktuber quest that the sea slugs are now also attempting to control the Penguins. Captain Marlin, the Captain of the Red Raktuber submarine, has been taken over by a sea slug, resulting in his insanity and obsession with the sea. Captain Marlin tells the player that he plans to eventually plant a sea slug on the rest of his crew, followed by the entire Penguin species and the entirety of Gielinor.