From the RuneScape Wiki, the wiki for all things RuneScape
Jump to: navigation, search
The Old School RuneScape Wiki also has an article on: osrsw:Scrying pool
Required materials:

A scrying pool can be built as the centrepiece of the Portal Chamber in a player-owned house. It requires 80 Construction and four marble blocks, and earns the player 2000 experience. It is the last centrepiece able to be built in the Portal Chamber, the first being the Teleport focus and the second being the Greater teleport focus. Like the teleport focus, it can still be used to direct portals to teleportation locations. The scrying pool can be used to see the areas where players portals would take them. Moving the camera angle is possible in this mode. 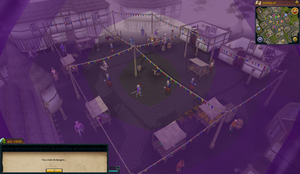