From the RuneScape Wiki, the wiki for all things RuneScape
Jump to navigation Jump to search
This article is about the clan camp npc. For the goblin, see Goblin scribe.

Amos Twinly the Scribe is an NPC at the Clan Camp.

After you start your clan the scribe gives out vexilla to clan members for them to plant in the ground to show off the clan they are in.

If you ask the Captain of the Guard about clans, he will send you to the Scribe. The Scribe gives you all the information you need about clans. Except information about Rated Clan Wars, the Sergeant-at-Arms will help you with that.

As of 16 May 2011, clan owners can speak to the scribe to change the name of their clan. They can only do this once every 28 days, however. 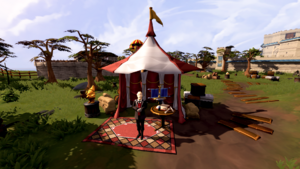 This information has been compiled as part of the update history project. Some updates may not be included - see here for how to help out!
Retrieved from ‘https://runescape.wiki/w/Scribe?oldid=35699599’
Categories:
Hidden categories: